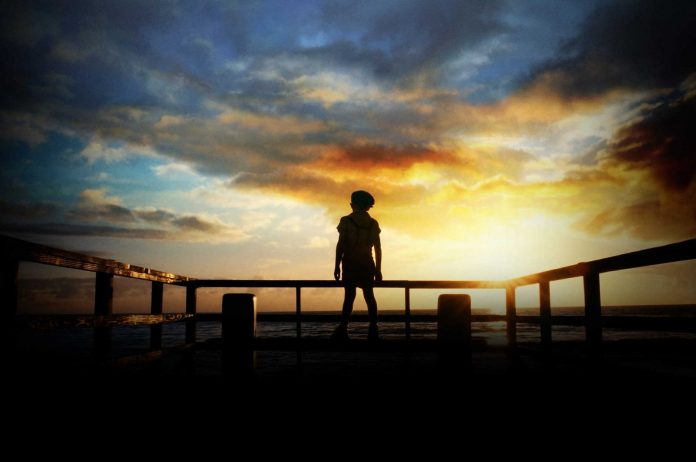 Do you believe you can do this?

I’m opening the review with a quote from a film that surpassed my humble expectations with a touching and flawlessly told story. The 2015 US/Mexican co-production Little Boy ranks as one of the best Coming-of-Age films I have had an opportunity to see and review. The attention to detail in the film is so immaculate that even its title serves a dual purpose — hinting of the character based focus of the narrative while calling the viewer’s attention to a key scene that has significant import for the development of the story.

That story revolves around Pepper Flynt Busbee (Jakob Salvati), an 8-year-old living in a small fishing village in California. He finds comfort and inspiration in his father, James (Michael Rappaport), his “only friend.” But then, in the midst of the Second World War, Pepper’s dad is drafted into the military after London Busbee (David Henrie), his eldest son, is disqualified for having flat feet.

Little Pepper misses his dad and desperately wishes that he would come back. At church, in a sermon, Pepper hears the priest quoting Matthew 17:20: “…if you have faith like a grain of mustard seed, you can say to this mountain, ‘Move from here to there,’ and it will move, and nothing will be impossible for you”.  So Pepper begins to think that perhaps he can get his dad home if only he can increase his faith. He is entrusted with a list by the priest (The Works of Mercy) – an ancient list that could make his faith powerful:

The priest adds one essential item to the list, which he says will make it work better for Pepper. However the item is an overwhelming task for a little boy to perform. But if that’s what it takes… then he’s game to try anything. And it turns out Pepper is aided by an unlikely ally…

A voice-over narration gives the film the flavor of a novelistic first person point of view. The narrator is evidently the grown-up film protagonist (Pepper Flynt Busbee) relating childhood recollections of the time when he was known as “Little Boy”. He provides a sense of place and time, describing not only his experiences, but also what life was like in a small town in America during the war. This voice-over technique is especially effective in Coming-of-Age narratives, for we get the perspective of an adult whose rite-of-passage is the focus of the story.

The film’s conflict is predominately an internal one, for the focus lies on an interior psychological conflict within the central character. The director uses the indirect-subjective point of view to bring the viewer close to the action. Frequent close ups on the expressive face of Jakob Salvati’s character conveys the emotional turmoil within the little boy so affectingly that one will find it impossible to remain indifferent to his story.

An emotional bond, an intimate involvement with the film’s protagonist, is being established. I laughed with Pepper Flynt Busbee, hoped with him and cried with him.  To be drawn into the feelings portrayed on the screen is one of the best testaments of the cinematic quality of a story, and Alejandro Monteverdi’s movie succeeds in this regard.

While Jacob Salvati’s performance was the most impressive, the entire cast managed to deliver dramatic acting with emotional and psychological depth, significantly contributing to the moving impact of the story on its viewers.

Period costuming and set designs are exceptional, providing an authentic backdrop to the story’s authenticity and giving the viewer a sense of real time and place — a feeling of being there. References to the popular US culture at the time – such as the newsreels and comics obsession — further boost the authenticity of the picture. 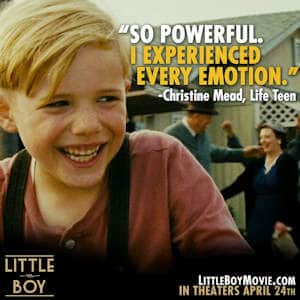 Little Boy’s runtime is a bit short of two hours, yet skillful editing ensures that the viewer is kept engaged at all times. One example of this is the utilization of parallel cuts to quickly alternate between two actions simultaneously taking place at separate locations (in reality and fantasy: from a room in the house, to a pirate ship, to a village street, to the jungles of the Philippines).  Another technique effectively used by the director is Inside/Out editing (where the viewer is jolted suddenly from a familiar scene or line of action to a close up detail in a new and unfamiliar place) resulting in dynamic and exciting scenes.

I thoroughly enjoyed Little Boy and consider it a true masterpiece of the Coming-of-Age genre. Highly recommended for the readers of TheSkyKid.com!

Facebook
Twitter
WhatsApp
Little Boy (2015)A 2015 US/Mexican co-production, Little Boy ranks as one of the best Coming-of-Age films I have had an opportunity to see and review.
TheSKyKid.comYoung talent in the movies and the arts