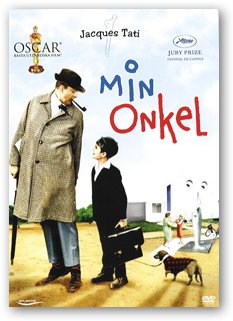 Mon Oncle is a nice French comedy I saw the the other day.  There were several fun scenes – but overall I don`t think that it was quite enough to make it a good comedy . Most jokes in it are hidden in the details rather than in the story itself and I guess one has to have an affinity to the french cinema or humor to fully appreciate this film. The opening scene featuring  some homeless dogs nosing around a street made me wonder what kind of movie that would be.

The main protagonist in Mon Oncle  is  Monsieur Hulot who has a rather unique appearance completed by his pipe and trenchcoat. He lives alone – doesn`t work and is very succesful trouble maker even if all troubles caused by him are rather incidential than on purpose. To me he just had an easygoing attitude – much like myself – but this eventually is considered as a good personal characteristic by all the ” serious and grown up ” people out there such as the his sister`s husband .He is obssesed with is work and sees the behaviour of his relative as quite irresponsible and unacceptable .

Gerard is a young boy who lives with his father who is director of a plastic factory and his mother who is obsessed with the housekeeping of their modernistic home. The boy seemed deprived from any real affection and attention from his parents and found his escape and chance for being mishivious in the walks with his uncle. In fact despite the fact that most people may think that with the the oddness of Monsieur Hulot was the funniest thing in the movie , I  enjoyed more watching the tricks pulled out on strangers by Gearard a group of boys playing in the streets. ( They did not get enough screen time by my opinion which is a shame for such a long movie ).

The dialogue in the film is brought to minim, so you will have no problems following the story in French even without the english subtitles you will find on the DVD.  I did not quite like the soundtrack of the movie either- at first it was OK – but after the first 30 minutes I found the music to be quite annoying.

The movie director Jacques Tati seems to be famous , or at least well known in the cinema circles , yet Mon Uncle is the only film I have seen on his and its not like I feel an urge to look for the others .The movie was quite long – a bit over 2 hours and failed to keep me interested in it for that time.The movie won a Oscar in 1958 for Best Foreign Language Film.