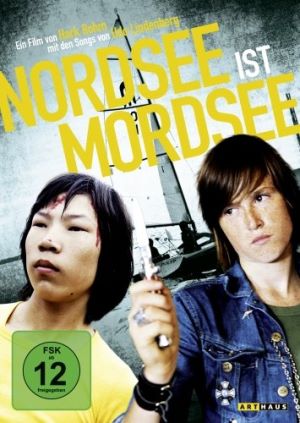 Sometimes one stumbles upon a true cinematic gem from the past when exploring older films. Such is the case with the 1976 German Coming–of-Age film by Hark Bohm, North Sea Is Dead Sea ( Original title: Nordsee ist Mordsee). In it, 13-year-old Uwe (Uwe Bohm) finds himself slowly slipping into delinquency.

His character projects toughness like many other teens when they are aiming to appear cool among their friends. Yet, in one of the scenes, we see him playing with a remote controlled tank; in another, he allows his emotions to prevail evidencing childish vulnerability.

While the action is set in the years that the film was released, the 70s, Uwe’s Coming-of-Age experiences (and those of his friend) are universal and it won’t be hard for anyone to associate with the film’s protagonists.

A German website (prisma.de) mentions that the release of the film in its own country was delayed by 16 years by monitoring authorities who feared the imitation effect on young viewers.  This is in line with how accurately the rebellious spirit of youth is portrayed in the film (even if the ban itself is ridiculous – just as if Tom Sawyer and Huckleberry Finn was to be banned for portraying the adventures of mischievous boys).

Dysfunctional families, a hard working single parent,friends and foes among kids, and cruelty towards immigrants — sound familiar? Life really hasn’t changed much since.  Uwe’s living conditions are quite lousy due to his dad drinking too much and punishing his son physically when he sees fit. Yet, like father like son as Uwe doesn’t hesitate to deliver punches and bullying to a Chinese boy, twistedly perceived as a cool thing to do among his friends.

Weirdly enough, after Uwe gets into trouble with the police for a prank that he pulled (one that involves borrowing someone`s car without asking), and is severely beaten by his dad, it’s that bullied Chinese boy with whom Uwe decides to run away.  They sail down the Elbe River with a make shift boat and their escape turns into a real adventure …

Vintage buffs (like myself) will greatly appreciate the film`s visual design. It is not only artistically well suited to the film`s story, but it gives the whole film a boost in authenticity thanks to the settings that outline both temporal factors (fashions of the times) and the social structures and economic factors  of Germany in the 1970s. I wish that kids nowadays still wore the kind of clothes those in the film do (I would love them for myself as well). Although costume and makeup design have no other function than to set the film in a particular time period – fashion in the film is worth seeing for its own sake. It makes one wonder why fashions had to change to what we wear today.

Meaningful lyrics and great sounding pop-rock vibes by the German rock musician and composer Udo Landenberg comprise the film’s musical score. Throughout the film, the music — combined with the excellent camerawork –add another layer of meaning to the trials and tribulations of the young protagonists.

The finale of North Sea Is Dead Sea does not disappoint with a made up ending which earns it more points on my appreciation scale. Wonderfully acted, shot, and directed (Hark Bohm is one of the most prominent directors of German Coming-of-Age films focusing on youth, social tensions and social taboos), North Sea Is Dead Sea is well worth anyone’s time.