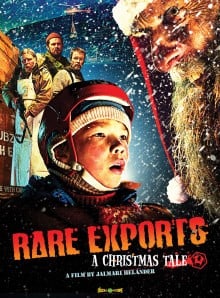 Now that Christmas is over, I can safely recommend a film that will give you a totally different perspective on Santa Claus. It’s a perspective that could convince all naughty kiddies that they’d better behave or face the consequences. For in this film they will discover that…

“The real Santa was totally different. The Coca-Cola Santa is just a hoax.” (Pietari, Rare Exports)

Jalmari Helander, who wrote and directed this Scandinavian film that is distinctly different from the standard holiday fare, makes sure that the story sneaks into one’s mind to deliver a real scare. Even if you don’t get scared, the bewildering twist of this Christmas tale is guaranteed to go beyond your wildest imaginings.

The story of Rare Exports is told from the perspective of a young boy, Pietari (played by Onni Tommila), who discovers that the truth about Santa Claus is much more disturbing and surreal than common wisdom states. From the opening scenes, one could wrongly assume that Rare Exports is a childish film (if we judge it by the way some characters act). However, it isn’t long before the narrative makes a sudden switch to become a full-fledged philological horror flick, filled with dark humor. Missing children, hidden secrets, elves — the fantasy elements are all present, but in a spooky realistic yet suspenseful manner.

There is not much character development in the movie, if you don’t count that of the little Pietari, who realizes that if Santa is to be stopped (yes, you read it right: stopped) – a sacrifice will have to be made.

By now you may have guessed that Rare Exports is not your typical holiday movie, even if Santa Claus is an essential figure in it. I am not surprised that the film is a Scandinavian production as, in a way, when it comes to unique chilling narrative (recall the Coming-of-Age vampire movie: Låt den rätte komma /Let the right one in), you can never go wrong with a Scandinavian film. What’s more, the way Santa is portrayed in this film is actually based on a folklore tale from Finland/Lapland, which is quite divergent from the Coca-Cola red suited, good-hearted old man we have grown up to accept as the image of Santa. 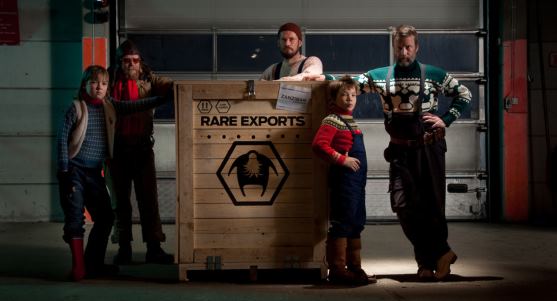 The film has good cinematographic qualities (camera work, score and sound effects) that fuel the suspenseful mood of the narrative. Of course, the director made full use of the location in which the story takes place with its natural characteristics (think snow, snow, snow). I particularly liked the way in which a whole different meaning was given to a regular snowy peak. A fairy tale that has come to life and a thrilling — and exciting — Christmas experience.

Without a doubt, Rare Exports is one of the weirdest films I have ever seen. It’s rated R, which I think is a bit too restrictive. While I would not want pre-teens to see the film (they could start fearing Christmas), a teen will appreciate the twists and enjoy the film — and so will most adults.