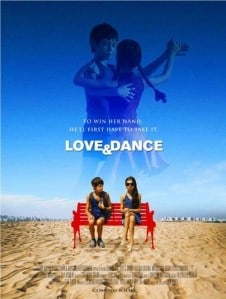 When you have a film about life, about the magic of dance, about care and devotion – there is no more suitable title than Love and Dance.

Little Chen (Vladimir Volov) lives in Israel with his father and mother. His father is Israeli, but Chen’s mother is Russian, which makes him half Russian and, as such, naturally predisposed to the magic of dance. Yet, when the film opens and the viewers observe how Chen grows and learns about life — of what it means to respect a person; of what it takes to follow your dreams; of how to impress a girl and fall in love – in love with the music, in love with the dance and last, but not least, in love with a girl. The Coming-of-Age experience of the young actor, as well as that of his parents, teachers and friends, is essential to the story and truly rewards the viewer with a lot of knowledge and insights of what it means to stand up for yourself and chase your dreams.

Love and Dance is a tender and emotional film. In some respects, the story line reminds me a bit of the one of the much touted film Billy Elliot (2000). If you have seen one of the two films and liked it, you’re going to the love the other one. The cinematography was excellent and the soundtrack tasteful and moody. The scenery chosen for most of the scenes  features impressive pictures on rooftops and on the beach of the desert province town of Ashdod.  Those shots are  breathtaking.  The magic of the dance is so skillfully captured by the camera that most viewers will be inspired by it. The plot of the film requires some scenes to be shot by a hand held camera, which adds a nice touch to the film as it makes the story more intimate and personal.

One of the best aspects of Love & Dance is the wonderful acting performance by its entire cast (leads and extras).   Drawing another parallel to Billy Elliot and the performance of Jamie Bell as Billy, Vladimir Volov, who made his debut in the film, captures the hearts of the viewers by his natural charisma and emotional portrayal of his character.

Dancers, and everyone who appreciates the art of dancing, will like this film as it portrays (and I would like to stress this) the importance of dance as a language  — as a tool for transmitting information, emotions, feelings. And, indeed, through it Chen discovers his inner self. In addition to that, the viewer can observe how human feelings, expressed through dance, are able to break down barriers, which many times society imposes (cultural differences, gender stereotypes…etc) . While the story focuses on the children, audience members of all ages will enjoy this film as,  like often is the case with coming of age movies, we see a portrayal of our society through their eyes.

Love and Dance is written and directed by Eitan Anner. The film was released in October, 2006 in Israel under the title Sipur Hatzi-Russi. This film receives a high recommendation for anyone who wants to relive the wonders of first love and feel the magic  of music and dance.