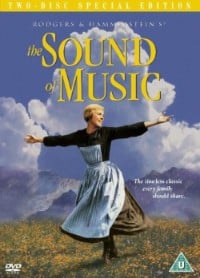 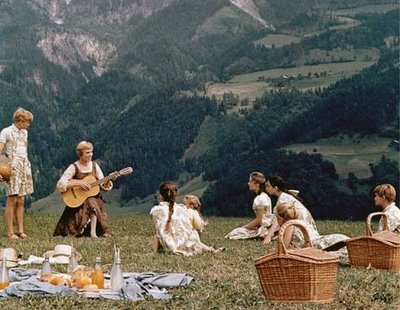 The Sound of Music is a classic musical film. Indeed, many think it’s the best movie musical ever made. It remains to this day the only film I’ve ever seen in a movie theater more than twice (I saw it eight times) and it ranks in my top three all-time favorite films and is my favorite movie musical. After seeing the film, one left the theater literally singing the catchy music from the film – classics such as Do-Re-Me, My Favorite Things, Climb Every Mountain, Edelweiss and, of course, The Sound of Music.

The film is based upon a memoir called The Story of the Trapp Family Singers about Georg and Maria von Trapp and their children in pre-WWII Austria, first made into a popular Broadway musical in 1959 by the famous team of Rogers and Hammerstein and then adapted for the big screen and released in 1965.

As the movie begins, Maria is a postulant (one who is discerning to become a nun) in 1930’s Austria, and she is failing miserably at it. She loves life, loves people and loves music. The wise Mother Abbess at the convent where Maria lives decides that Maria needs to experience more of life to make sure living a cloistered life in a convent is what she is really called to do. So when Navy Captain Georg von Trapp contacts the convent looking for a governess for his seven motherless children, Maria is given the job. 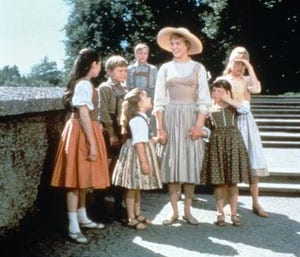 The Captain runs his household like he runs a ship – full of rules and discipline. The children are unhappy and resentful of the many governesses their father has hired and have become very good at running them off as fast as the Captain can hire them.

They begin to do the same with Maria when she first arrives, but because of her kindness and understanding towards them and because of the sense of fun she has about her and her obvious love of music (which the children also loved in their household when their mother was alive), she soon draws them in. She brings some much needed joy to their lives and, eventually, to the Captain’s as well.

Eventually the Captain and Maria find themselves falling in love, despite the fact that Georg is already engaged to a Baroness and Maria is still technically a postulant. Will they marry? It’s the 1930’s in pre war Austria. Will the Captain be called to duty by the Nazi’s when Austria is annexed to Germany? What will happen to the children? 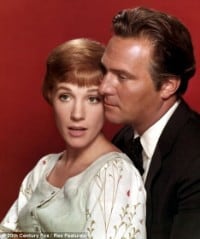 The Sound of Music stars Hollywood leading man Christopher Plummer as Georg (the Captain) and relative newcomer Julie Andrews as Maria. Ms. Andrews had her film debut the year before The Sound of Music was released in another very popular film – Mary Poppins. She won the Academy Award for Best Actress for that movie, but it was The Sound of Music that made Julie Andrews an internationally known movie star or, as she puts it, “it changed my life and made my career”. She went on to star in other popular films such as Hawaii, Thoroughly Modern Millie, Star!, Victor Victoria and The Princess Diaries.

Besides its two big stars, Director Robert Wise cast seven relative unknowns as the von Trapp children. One of them was somewhat better known than the others. Angela Cartwright, who at the age of 3 was Danny Thomas’s TV daughter on Make Room for Daddy, was probably the best known of the seven. She would later go on to play Penny on the TV show Lost in Space. The children ranged in age from 5 to 21 — five girls and two boys, and all became world famous as a result of being cast in the film. 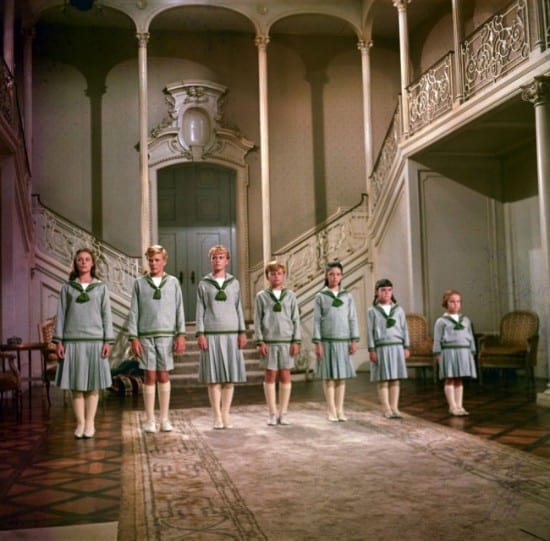 The cinematography in the film is wonderful, filled with scenes of the majestic Austrian Alps as a backdrop and quaint cityscapes of Salzburg, Austria. The colors are vivid and the authentic costumes add to the overall look. And, of course, there’s that unparalleled soundtrack of Rogers and Hammerstein music that just so aptly moves the plot along.

The movie is of the coming of age genre.  In addition to the obvious coming of age of the children in the film, growing up in pre-war Austria, in a sense it’s also a coming of age for the female lead too — Maria — who is trying to figure out her place in life.  At the beginning, she thinks that’s to be a nun, but as the movie continues she sees her life headed in another direction.

The official, pre-release trailer of the movie, the one used in movie theaters to promote The Sound of Music, offers theskykid.com readers a good feel for all the various aspects of the movie mentioned above. You can get a good taste of the scenery, the music and some of the most popular scenes from the movie itself.

This year marks the 45th anniversary of the film’s release in 1965. In 1966, the film was nominated for 10 Academy Awards (Oscars), winning five – including Best Picture. Director Robert Wise also won an Oscar for Best Director for the film.  To celebrate its 45 years of entertaining audiences world-wide, for the first time the film is now available in HD on Blueray.

To commemorate the anniversary, Oprah Winfrey recently did a reunion of the actors who played the von Trapps in the movie – the Captain, Maria and the seven children – the first time all of them have been united in such a way in 45 years.  Video of that show can be found on Oprah’s website.

NBC’s Today Show also did a 45th Anniversary reunion of the cast (this time minus the Captain – Christopher Plummer who was making a new movie).  Julie Andrews and the “von Trapp children” were interviewed by the popular morning program’s Ann Curry and Kathy Lee Gifford.  Here’s some video footage of that interview. 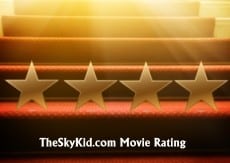 Film title: The Sound of Music

For more information about The Sound of Music visit these websites: