When it was first suggested to me that I write a review of the production of Oliver! by the Providence (Rhode Island) Trinity Repertory Company (Trinity Rep), my first reaction was that maybe there wouldn’t be enough interest in the show to warrant me publishing a review of it on this site.  Trinity Rep is an award winning repertory organization — a regional professional theater with sterling credentials, celebrating its 50th anniversary this season. Among those glowing credentials is the fact that it has introduced over 50 world premieres of new plays and the company received the Tony Award for Outstanding Regional Theater Company in 1981.

But still, I thought, it’s a local production – and after its February 20 to March 30, 2014 run, no one else could go see it, unlike say a touring production.

After a lot of back and forth I decided to do the review for two main reasons:

Firstly, one of the show’s stars is Noah Parets, in the role of the Artful Dodger. Many regular readers of this site are huge fans of Billy Elliot The Musical and love to follow its past and present stars in their entertainment careers. Noah, as you may know, starred in BETM in the title role of Billy 93 times in the North American tour production of the show.  I’m one of those big fans of BETM and I believe in giving the casts who have brought the show to life — especially the absurdly talented young people in it — as much recognition as possible. 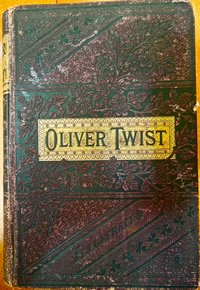 My second reason for deciding to do the review is that I’m a big fan of Charles Dickens and have been since my high school days, and I believe many of the readers of this site are as well. I subscribe to the widely held view that Dickens was the greatest novelist of the Victorian Age. In particular, his second novel, Oliver Twist, establishes Dickens as perhaps the most important social commentator/critic of the age. Through the book, he exposes many of the societal issues involving the children of his day: their poor treatment in the workplace, recruiting them as criminals and the fact that many of them were orphaned and living on the streets. The play and movies that have been subsequently adapted from his book have been wildly popular, including the award winning 1968 movie and very successful versions of the musical Oliver! on stage in both London and on Broadway. I confess that many years ago, I directed two different youth productions of this musical myself, and it remains one of my all-time favorite shows.

Trinity’s production of Oliver! was directed by the husband and wife team of Richard and Sharon Jenkins. Both have a long association with Trinity Rep. Richard joined the acting corps of the company in 1970, six years after Trinity’s establishment in 1964. He played a large variety of roles in subsequent years before becoming Trinity’s Artistic Director for four years (1990-1994). He then left the organization to pursue a career in motion pictures and television, appearing in over 60 feature films and winning many awards in the process.

Sharon Jenkins has been the choreographer at Trinity for over 40 years and has also been a dancer and dance teacher all over the local area.

In this article by RI cable provider Cox Communications, there’s a wonderful video clip with Richard and Sharon in which they talk about how they put the show together and what their vision for the final product was. Also included are a couple of the actors talking about the show, and some actual scenes from it.

Trinity’s version of Oliver! is somewhat darker and, what some have called, “grittier” than most of the productions of the musical I’d previously seen or of the movie version. It’s also less of a spectacle with just 19 actors (10 adults and 9 children – including Oliver and The Artful Dodger). That concerned me when I first read about it, but Trinity makes it work in its intimate 500 seat Chace Theater. They also decided to use the same basic set from another Dickens favorite and hugely popular holiday show that is annually produced by Trinity – A Christmas Carol. Again, I wondered when I first heard of it if that would work, having seen A Christmas Carol many times. I was pleasantly surprised that it worked wonderfully well just by changing signage and decorating it differently from the productions of A Christmas Carol I’ve seen at Trinity.

The acting was superb. Trinity regulars, who have proven time and again how versatile and talented they are, played most of the adult roles. While all portrayed their characters convincingly, I’d especially single out the performances of three of Trinity’s veterans: Stephen Berenson as Fagin, Anne Scurria in the dual roles of Mrs. Corney (the matron of the orphanage) and Mrs. Bedwin (The housekeeper/nanny of Oliver’s uncle), and Rachel Warren as Nancy.

Berenson has been with Trinity for 25 years. His Fagin is definitely darker than most portrayals of the role I’ve seen. Oftentimes Fagin is played almost comically. But while Berenson gives Fagin many familiar mannerisms that often will make you smile, there is also no doubt that (as Richard Jenkins says in the above mentioned video) Fagin would slit the throats of his young pickpockets if he thought they were trying to steal his “treasures”. Berenson also has a great singing voice — ably vocalizing Fagin’s big musical numbers Pick a Pocket or Two, Be Back Soon and Reviewing the Situation.

Ann Scurria’s versatility (with the help of completely different looks – makeup and costume wise) enabled her to shine as the often-comical Mrs. Corney (left), while playing equally well the comparatively straight role of the matronly Mrs. Bedwin (right). She’s done over 100 shows over the years for Trinity and I’ve never witnessed a poor performance from her.

Like the others, I’ve seen Rachel Warren in many different roles at Trinity over the past 14 years she’s been with the company. Most times they’ve been in straight plays. But in the few times I’ve witnessed her in Trinity musicals, I’ve always been impressed by the way she can belt out a song with her strong, melodious singing voice. Her renditions of A Fine Life, I’d Do Anything, As Long as He Needs Me and an especially rousing Oom-Pah-Pah were terrific – as well done as any actress I’ve ever seen in the role perform them.

As far as the children, the girls and boys who played the children of the workhouse and of Fagin’s gang are all precocious and talented. They tackled the familiar musical numbers such as Food Glorious Food, I’d Do Anything and Be Back Soon with aplomb. The dancing included in their numbers, while not complex, was well executed and appropriate for each number. Of course the key to the success of any production of Oliver! is the quality of the performances of the two child leads who play Oliver and The Artful Dodger. In Trinity’s production they are played by 10-year-old Phineas Peters and 14-year-old Noah Parets respectively.

Even at such a young age, Phineas is a Trinity veteran, having appeared in four previous productions at the theater. His Oliver was played just right – primarily with naivety and innocence where the part demanded those qualities, but with a spot of more “vinegar” where appropriate. His singing voice was that of a little boy and fit his big number, Where is Love, very nicely. While not primarily a dancer, in the few dance numbers he was in, he more than held his own.

On the other hand, the other child lead, Noah Parets, wasn’t challenged nearly as much dance-wise playing The Artful Dodger as he had been playing the lead in Billy Elliot The Musical. But when he danced in Oliver!, there was no question he was a dancer, with his smooth, precise and graceful dance moves. Noah is a true triple threat and I thoroughly enjoyed his take on the role of the Dodger. Especially worth noting were his terrific performances in Consider Yourself and in I’d Do Anything.

Music was provided by a very versatile five-piece ensemble featuring keyboards, cello, reeds, percussion and a variety of Victorian instruments ranging from a Recorder to a Penny Whistle to a Euphonium.  It wasn’t the large orchestra of the movie soundtrack or even the Broadway musical, but it was effective and the sound enhanced the “look” of the production that the directors were striving for.

All in all, a very enjoyable evening of theater at the venerable Trinity Rep. I’m glad I was able to see one of my favorite shows and help celebrate Trinity’s 50th Anniversary.

Giuseppe Bausilio and Life After Billy: An Interview

The Prize Guys: An Interview