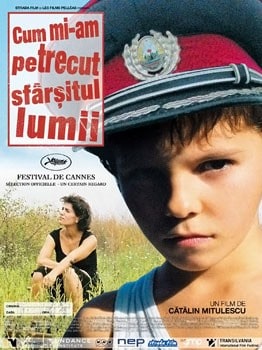 The Way I Spent the End of the World

There is something in common in  movies coming from East Europe – especially of the ones who focus on the period before 1989. I have seen my fair share of them and probably that is why the Romanian film The way I spent the end of the World did not surprise me much or offer anything really intriguing in its plot , directing and overall atmosphere .

The film focuses on the coming of age of the 17 years old Eva during the last year of the communist regime of Ceauşescu. His 7 years old brother Lilu – also gets trough a lot of thinking and influenced by the environment around him he volunteers for a children`s choir which is to sing for the president , hoping that he would be able to assassinate the dictator.

Politics , betrayal and hope are the main themes in the film. A rather good portrayal of what the life was like in Romania during the ruling of  Ceauşescu is probably the biggest value in the film.  Yet I could not say that I enjoyed the film much as it got me bored in its first half hour – and watched the remaining hour hoping that something interesting would happen – but it did not.  Then again as it is with all my reviews I am expressing my view on the film based on my thoughts and experiences – which would not necessarily overlap with the ones of you or others critics .

I have read some raving reviews of the film ( my guess by people who have not seen many films from Eastern Europe and that`s why what they saw on screen seemed intriguing ) – the folks at DVD talk even call it “ the kind of Sundance award-winner ” and while I disagree with such statement – you may want to check the film for yourself and decided upon who you are most likely to agree with .

The casting of the film was average – yet the performance of Doroteea Petre as Eva as well as the one of Timotei Duma in the role of her brother is worth mentioning . They deliver a good performance portraying the  life of two children growing up during a communist dictatorship. Thanks to the two young leads perceptive beyond their years  – fans of the coming of age genre might end up liking the film.

This review would have not be possible without the valuable support of CVMC .

Previous articleFlight of the Navigator – remake
Next articleMotorama