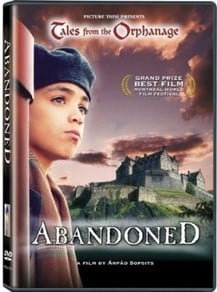 Abandoned also known as Torzok is a powerful movie. It was made in Hungary and is a fine example of the East European cinema. Its director Árpád Sopsits shows the reality of a reformatory school during a communist regime in the country. He uses the yellow color to separate the dream like scenes from the rest – this color technique is later used in the movie Traffic. The movie portrays the harsh reality of the live in Hungary from that time because it is actually based on the writer/director’s own childhood.

The main character is Áron – a boy send to a reformatory school not because he has some something , but because his mother is sick and the father does not want to take care of his son. Once in the school Áron has to face the initial hostility of the lands there towards the newcomers – including beatings and hard words .He manages to survive through all those harsh moments and is soon accepted and befriended by the boys from the school.

The actors in the movies are exceptionally talented despite their young age and the characters they portray come to live – each with its own uniqueness. The overall atmosphere is dark and the movie can be considered as hard to watch by anyone – probably the only one witch harsher atmosphere on a similar topic was in the movie Song for a raggy boy . The few moments of hope which the viewers can observe are directly related to the friendship between Aron and another student Attila as well as the one with his melancholic teacher Gálffi – who seems to be the only teacher from the reformatory school who cares of his students and opposes even the despotic director of the institution.

Some of the scenes are really cruel – in one of them one of the teachers makes few boys to beat a friend of theirs themselves because he prayed to God – which was forbidden during the communist years.This boy however is able to prove a great deal to the other boys through his faith in things un-seen. [1]The cruelty in which the boys in the school are treated is awful and I do not buy the statement of their directors – that this is the only way to prepare them for the reality outside .

The soundtrack is very powerful -classic music mostly – a bit of melancholic as well – it really contributes to the overall atmosphere.

A must see coming of age masterpiece – I highly recommend this movie.

“In the tradition of Louis Malle’s “Au Revoir Les Enfants” and other pics that autobiographically depict a grim world of alienated children, Abandoned is strangely beautiful thanks to the impressive camerawork by Peter Szatmari and the perfect performances. The Music by the group After Crying fits in very well.”