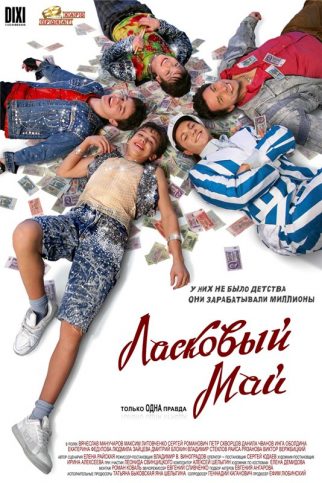 I am really excited about the review of the new Russian film Ласковый Май ( Gentle May), as it is a movie that combines both of my passions – coming of age films and great, uplifting treble music. The movie in question focuses on the creation of the group Ласковый Май in which boys who came out of childrens’ homes (orphans) became one of the best bands in Russia. This happened  thanks to their talent and the amazing lyrics written by the poet and musician Sergei Kuznetsov, who at that time worked as a teacher of music in the same Orenburg orphanage. The group was formed on Dec. 6, 1986 by him and the young soloist Yuri Shatunov – only thirteen years old at that time.

Before continuing with the review of the film I would like to honor Sergei Kuznetsov – who over the years helped many people to realize their dreams. I have written several times about projects of his such as Steklovata, Alis and Chernila dlya pyatogo klassa. You can visit his official site where you can find a lot of information about his projects and his art works – such as poems and prose .

Back to the film —  I found it really enjoyable and loved every minute of it. The cinematography is quite modern and the plot easy to follow. There are many comical scenes, many inspirational and, my favorite of all, those featuring music. The young cast is talented and well directed which influenced the film quality greatly. Admittingly, as someone who has seen a lot of Russian films – I must note that the style of  directing for  “Ласковый Май ” is quite different from some such as  “Ivanovo detstvo” or “Koktabel”. 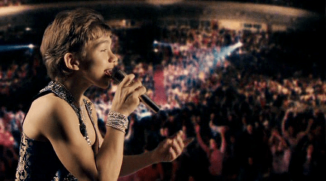 Even if the film is enjoyable – it doesn’t have the artful value which I typically associate with the Russian cinema. What’s more, Sergei Kuznetsov said that he liked the story, but at times he departed from the true story of the group creation and success. Yet, I am sure that many people who are unaware of this departure from the real story (which, by the way, is available in writing at Sergey’s site) would enjoy the story the way it is told in the film.

I viewed the film in Russian, but I’m sure that versions in other languages will soon be available. What I am hoping for is that many people will see it, will listen to the wonderful Russian music and eventually may decide to help Sergei Kuznetsov — who has never stopped creating wonderful music. Most of the time he distributes that music for free , but you may decide to support him and his studio by donating or getting some exclusive materials as described at his site. That would made a difference in the lives of many young people – who love the music and want to be part of its creation.

Finally, I have decided to include an original concert recording of the group Ласковый Май performing back in the 90s. I know that if you like it as much as I do- you will find a way to see the film as well.

And before checking out the usual film screenshots – here  is an original photo of Ласковый Май : 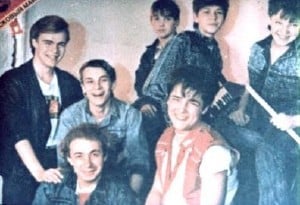