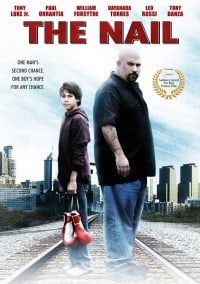 On the streets of Philadelphia an ex-convict and former boxer is released from prison, trying to get his life back on track.  He forges an unlikely friendship with a 14-year-old Puerto Rican boy from an abusive household, after witnessing him getting beat up by bullies on the street. A chance to mentor and for redemption,  but it all comes at a price.

The story in The Nail: The Story of Joey Nardone follows the classic three-act structure yet, unfortunately, the dramatic final scenes do not fully compensate for the slow paced exposition and development of the story.

If you have seen any of the Karate Kid movies, you will find a lot of similarities in the plot: a bullied kid, a surrogate father figure…etc. The 1976 sport drama Rocky and the 1992 film starring Edward Furlong, American Heart, also share similar motifs with The Nail: The Story of Joey Nardone.

While the production value of Director James Quattrochi is somewhat inferior to the films mentioned above (mostly due to some issues with casting and directing), the film’s story manages to evoke strong emotions while illustrating the impact a positive influence and true friendship can have on the development of a young person.

The benefits of learning from one another in an inter-generational friendship, from inspiring self-confidence to discovering a way to redemption for mistakes of the past, is emphasized in The Nail: The Story of Joey Nardone, making the film inspirational and entertaining at the same time.

At times, the dialogue comes across as stilted – almost as if it were over-rehearsed. While this may cause an annoyance for some viewers, I was willing to dismiss it due to the enthusiasm with which newcomer Paul Orrantia played the role of the 14-year-old Jesus.

A classic tale of redemption, the narrative in the film also suffers from predictability, to a significant extent. But somehow one feels satisfied that expectations are met, rather than feeling annoyed and, in the final scene, one is left with the feeling that the film is well worth seeing despite its shortcomings.

The Nail: The Story of Joey Nardone Trailer