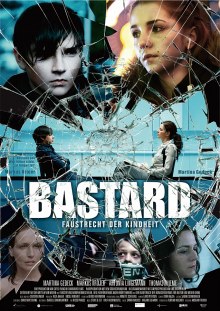 “…Sometimes a bad past is better than none…”

Discovering who we really are — that’s a challenge that some people never complete. Carsten Unger’s 2011 film Bastard offers a distinctive exploration of human nature in a disturbing and effective manner which, combined with an ingenious plot abundant with questions, twists and resolutions, is guaranteed to embed itself in the mind of its viewers.

Nikolas (Finn Kirschner) has disappeared. No one has a clue of the whereabouts of the nine-year-old boy until a video clip showing him chained in a cellar is spread around the mobile phones of the students from his school. In the course of the investigation, the police focus their attention on a likely suspect – a 13-year-old boy.

The boy doesn’t deny his involvement,  but his age makes him exempt from criminal liability for his actions (Defense of Infancy). This leaves the criminal psychologist, Claudia Meinert (Martina Gedeck), with few options – at least until the boy turns fourteen– which is due to happen in three days.

In the meantime Mathilda (Antonia Lingemann), a young girl of twelve, is trying to get the attention and affection that her alcoholic mother cannot provide by approaching married men – looking for a father figure or something else. Her behavior greatly disturbs the subjects of her advances.

The fates of Nicolas, his kidnapper, Matilda and the police investigator intertwine. The story develops in an ambiguous manner. Is a young boy capable of committing kidnapping, torture, and murder? Can a deprivation of affection cause irreversible mental harm to the mind of a young girl – making her indifferent to the pain of others?

Bustard essentially has three main protagonists, each with his own fate and demons to conquer. The age of two of them, and the nature of the story, results in a powerful psychological thriller with significant Coming-of-Age overtones. The only similarly controversial film I could think of is Kai S. Pieck’s The Child I Never Was, which by coincidence is also a German production.

The directing of the film is immaculately executed. There are no unnecessary scenes and, despite the multiple secondary plot lines, everything ties together in a logical way despite a variety of plot twists that serve to enhance the experience of the viewer. The entire cast, including the actors in supporting and minor roles, deliver true-to-life performances.

The film is set in the present day (Lady Gaga is mentioned once) and the soundtrack is comprised of modern German and English language sounds that are very appropriate. Some of the more perceptive viewers, however, may feel a bit surprised to hear a children’s choir performing an English language song during a scene shot in a German church. While the song in question fit very well with the scene, it is also one of the very few flaws of the film.

As with most German films, the sets seem a bit cold and sterile, but that’s not that far from how things really appear in Germany (no offence intended to the German readers of this review). In the Bastard, the sets, use of shadows and the lighting all  help to portray the characters’ state of mind through means that differ from the facial expressions of the actors – and, in fact, there were few close-ups utilized in the film.

Bastard‘s  gripping and controversial storyline results in a memorable film that needs to be seen and experienced. Highly recommended !