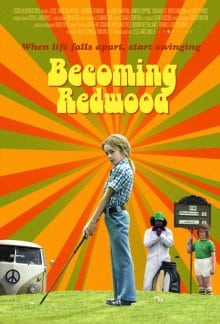 I found reviewing Becoming Redwood challenging.  In fact, half-way through the movie I felt an urge to turn it off before deciding to give it a chance and then watched it until the end. The result: while I still can’t wholeheartedly recommend the 2012 Canadian film, there are some positive things to mention that may help you decide if seeing it will be worth your time.

Redwood (Ryan Grantham) is the young son of free spirited parents (or “hippies”) who separate prior to the father emigrating from the US to Canada. Redwood gets to stay with his father. He grows up in Canada wishing that his family could have been like that of the other children. To cope with the lack of a mother figure in his life, he develops a peculiar fantasy world in which he is competing in a golf competition for a mythical Green Jacket which, once obtained, could make everything right.

When Redwood is eleven his father gets busted for drug dealing and the boy is send back to his mother in the US. She has established a new life with a new family: a husband, two boys of 13 and 15 and an old “delusional” person living in the basement. Redwood’s eccentricity faces hurdles in the “fitting in” process with his mother’s new family,  yet he manages to succeed while still keeping true to himself.

Redwood’s Coming-of-Age experiences:  adjusting, accepting and being accepted are universal. The fantasy world he imagines would have still made sense if Jesse James Miller (who wrote and directed the film) would have used the frequent flights from reality to Redwood’s imaginary world a bit more sparingly.

For example, a golf championship fantasy was such a lengthy part of the narrative that,  at one point, I was confused into thinking that the film was sport oriented and that maybe I would fail to appreciate the movie fully due to my lack of knowledge of golf.  My confusion was maintained during most of the film’s duration – mostly thanks to the overly-repetitive manner in portraying Redwood’s inner world.

On the positive side, the film’s soundtrack, which featured an abundance of songs by Phil Collins, enhanced the dramatic impact of the film – as both music and lyrics were a perfect fit for a story set in the 70s.

Ryan Grantham in the role of Redwood delivered a good performance, especially considering the fact that he was on the screen for almost the entire duration of the film, narrating the history of his life in first person. True, the know-it-all, overly self-confident attitude of his character got on my nerves at times, as the wise beyond his age character is somewhat of a cliché for the Coming-of-Age genre. But he did manage to portray emotion well when the story required it…

I was neither moved by the story, nor particularly entertained.  The movie did have good production design, score and acting performances – but those are about its only redeeming features.