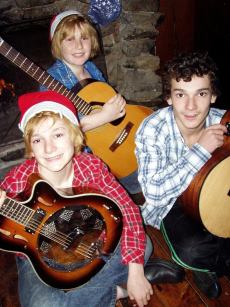 Brothers3 on The Mystery Artist Show

One of the good things I like about doing an interview for the show is being able to meet young artists from around the world. The first artist I had ever met from Australia was Matt Larsen and he was also the very first artist with whom I had ever done an interview.

The most recent artist I have met from Australia is actually a group of brothers that make up the group Brothers3. What inspired me most to contact them about doing an interview was the fact that every song they sing they write themselves and, in doing so, have won numerous awards over the last three years. So now here is the interview that I was lucky enough to be able to have with the boys: Shardyn (16), Tayzin (15) and Makirum (14). 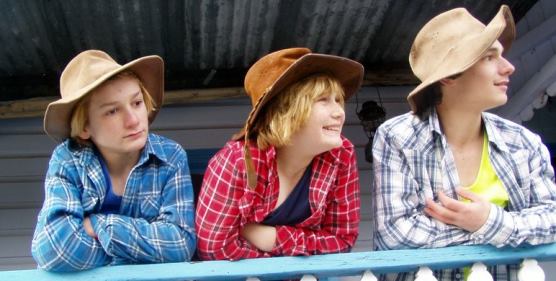 Note:  For this interview, the questions posed by The Mystery Artist Show will be represented by “TMAS” and the responses of the Brothers3 will be illustrated by “B3“.

TMAS: With your music being played here in the US and in Australia, do you hope that one day your music will be heard and played worldwide?

B3: Yes we do, but we are already being played in other places as well. We’re currently being played over in Denmark, France and other places around the world. We are very happy with our progress so far. We’d love to be able to make our music go worldwide.

Brothers3 – Where the Eagles Fly

I’m sure a lot of the listeners, along with me, would like to know what it’s like this day and age growing up without electricity.

B3: We didn’t actually grow up without electricity. We have three properties, one is in Sydney and we also have one up near Mudgee. While we didn’t have regular electricity, we did have a generator where we can run things like microwaves and stuff like that. We have gas bottles where we can run a bar-b-que. We also have solar lights. We don’t have the massive solar panels, but we have the small shed lights. So we semi had electricity when we were younger. We also didn’t have running water. We had to use tanks. It’s quite easy but there’s also a lot of physical labor involved.

TMAS: Do you boys go to a regular school or are you home-schooled?

B3: All of us are enrolled with distance education and that means that pretty much all of our work gets sent out to us and we fill in all the subjects and read all the questions and answers and learn to understand the work that way. It’s different than normal schooling but you get used to it.

TMAS: I know growing up on a farm requires a lot of hard work and long hours for the entire family. What kind of farm do you have? I mean do you have crops or animals that you have to take care of and who has what chores? 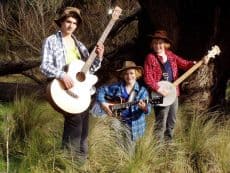 B3: On our farm, we run some sheep and some cattle. The real hard work comes from our dad making us help build sheds. Makerum and I built a shed, we built the floor.  We had to measure everything up. We actually had to lay down all the bricks and do all the flooring. That’s hard work. Our farm is set up so we can leave between gigs and Sydney and back to the farm so we really don’t have crops since they require quite a lot of work and we can’t guarantee that we’ll always be there for harvesting or to take care of them properly.  The animals kinda wander around and don’t require that much work. Sometimes you might have to give them a salt brick or something.  So our farm is really for writing music and songs.

TMAS: When did you boys first start singing together?

B3: Well we are all brothers so we’ve been singing all our lives, as we have musical parents. We’ve all been singing since we were toddlers. The band started as mom’s 50th birthday present and turned into something we loved doing.

TMAS: How did you manage to get noticed?

B3: It just kind of happened.  We go around from gig to gig playing and if people enjoy our music they come and see us. We do have followings in certain places as well.

TMAS: What made you decide to get into acting as well as singing?

B3: As a matter of fact, we have. I’ve (Shardyn) won the Sony Foundation Young Talent Award at Crop Fest for a film called The Cove. All of us have been in award winning stuff. 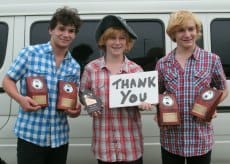 TMAS: Having received so many awards so far, is there any award that you are disappointed about not winning?

B3: No. We’re actually grateful for any awards that we’ve won. It’s a privilege to have won them because we’ve been up against some really amazing artists.

TMAS: What kind of advice would you like to give other young artists such as yourselves?

B3: Really keep at it and don’t give up. If you really love it, don’t let it go. You probably won’t make much money at all, so you have to do it because you love it and you always have to keep at it. Never stop trying.

TMAS: I’d really like to thank each of you for taking the time to do the interview with me today. Is there anything you’d like to add before we go?

B3: Yeah. A big special thank you to all those people who heard and bought our albums and supported us and I hope you’ve enjoyed our music as much as we’ve enjoyed making it.

For more on Brother3, visit their official web-site at http://www.brothers3.com/

The Mystery Artist Show is weekly program on Radio TheSkyKid.com .

Other guests of The Mystery Artist Show