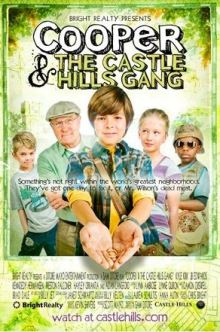 This is America! We have all seen at least a few movies that portray the American dream — a small town (or neighborhood) where everyone knows you and most everyone likes you, green fields, neat houses.  In other words,  an idyllic place to grow up, raise a family and, yes, shoot a family movie, which (besides entertaining) can be used as a marketing tool – to sell you the American dream.

Cooper and the Castle Hills Gang is a fun film – think Diary of the Wimpy Kid (referenced to by doodles) meets Dennis the Menace, add a few familiar cliché scenes (of the “boy hugs the girl while watching the 4th of July fireworks” type), an adorable young cast and an adventurous plot (yes, its corny, but fun never- the-less) and ta-da! You’ve got yourself a  crowd–pleaser (or some may say: a time – waster).

The main protagonist of the film is eleven-year-old Cooper Callaghan (Kyle Kirk) whose life is all about one thing: “serious, awesome fun”.   He is an adorable little kid who everyone likes – and for a reason.  Who would not like a polite little kid with a golden heart who is always ready to help?  One day, he and his friends (the Castle Hills Gang) embark on a mission – recovering a lost wedding ring for an old gentlemen heartbroken from its loss. This pretty much summarizes the plot. Disappointed? Don’t be.  You are likely to enjoy this flick.  It’s short enough (50 minutes) to keep you entertained and  avoids boredom( 20 more minutes could have been fatal).

Kyle Kirk as Cooper in Cooper and the Castle Hills Gang

The best word I can think of to describe the camerawork is — “modern”. Crafted focus shots, an abundance of aerial footage, brightly lit and warm-colored scenes, as well as sequences that are almost dreamlike ( Hey!  It’s the American dream, remember?) all combine for great visual appeal.

The young cast does a very credible job (special mention to Aidan Langford who plays Cooper’s little brother Billy). While one can’t expect Stand by Me or The Sandlot quality of acting, this cast deserves an A for effort.  Director Sam Ditore has a talent working with kids and I can only wish to see him directing a Coming-of-Age story with a more credible storyline in the future.

Are you ready for a surprise? Cooper and the Castle Hills Gang was shot on location at the Castle Hills master-planned community and it is actually a marketing tool promoting a real estate property. Selling the American dream – you can’t do it better than that.  Are you bothered by this newly discovered knowledge? You shouldn’t be because this is a film that will make you smile and feel good.  Even I (who often criticizes the American cotton candy films) was not too disappointed by this one. The secret?  I knew what to expect.  You can even watch it online for free at its official web-site .