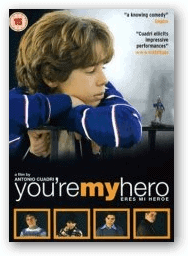 Eres mi héroe is a nice Spanish coming of age film in which the story is told trough the view point of the 13 year old Ramón. His dad changes frequently jobs and Ramón often have to face the situation of being the new kid in the school. Ramón has trouble fitting in which is probably why he tells us : ” I felt like a soldier pushed into a dead end ambush.”

One day he makes a life changing choice :

... to become invisible.
Then he defines his own three vital rules of survival and swears to himself to obey by them or die. His rules does not make his life easier , but come handy at times. As he comes of age and gains understanding of the life and his own self following these rules becomes a harsh if not an impossible task.

Rule number 1
Not to fight.
Everyone’s stronger than you.A punch hurts, but not as much as a kicking.
Rule number 2
Not to snitch.Snitching will not be forgiven.Snitching can have deadly consequences.
And rule number 3
Not to cry.They want you to cry,that’s why they hit you.

Not to fight, not to snitch,and not to cry.

Eres mi héroe feels like an autobiographical film and if you enjoy coming of age movies you are guaranteed to adore this one. The young Manuel Lozano does a respectable job in the role of Ramón and his acting is so good that many of you may re-experience their first kiss or wonder as a teenagers . The soundtrack is exceptionally good and if you are found of Spanish music ( like I am ) you would truly appreciate it.