“Destroyin’ demons is a good thing. Killin’ people is bad.”

If the opening credits of a film serve the role of a teaser — setting up one’s expectations about the story about to unfold – then Frailty‘s credits perfectly fit that bill.  A suspenseful selection of music (typical of thriller openings) and gritty visuals serve as a perfect example of how to grab one’s attention from the very beginning. True, they do not hint of the Coming-of-Age thematic of the story per se, as one discovers early on in the film.

It’s been a while since I have watched a film with such an original and engaging narrative as that of Frailty. Its story is twisted and disturbing – involving a shattered childhood and lost innocence — and it’s fully capable of gripping the viewers minds while challenging their perception of good and evil.

The director employs a retrospective narrative to address the film’s dark subject matter (a serial killer and manipulation) using an adult protagonist: Fenton Meiks (Matthew McConaughey). Fenton recalls an evening during his childhood when he and his little brother Adam (Jeremy Sumpter) are awakened by their father (played by director Bill Paxton) who claims to have been visited by an angel who has bestowed their family with a mission to hunt demons, thereby assisting God in the final battle between Good and Evil.

“There are demons among us. The devil has released them for the final battle. The war continues at the moment. But nobody knows it except us and like us…”

The boys are perplexed to hear about their dad’s visions, yet both have a very different response to them. While Fenton doubts the sanity of his father, Adam is more than willing to help his dad – and help God get rid of the demons that roam the earth. Decisions are yet to be taken and acted upon, but one thing clear: life as they have known it is no more.

When it comes to the acting performances, I must admit that what I saw exceeded my expectations. Bill Paxton as Dad Meiks delivers such a genuine persuasive performance that one feels almost ready to believe his story of God, angels and the demons that are to be destroyed. Such a notion is scary, but somehow the fact that the actors managed to achieve that level of manipulation, allows the viewer to understand better how his ideas may have affected the innocent, young minds of his sons.

Matt O’Leary, as young Fenton Meiks, turns in one of the best acting performances I have ever seen in cinema. Much of the Coming-of-Age nuances of the film come from his struggle to understand, make sense of and eventually fight the will of his father. This makes him the main driving force behind the story – told from his perspective as an adult recalling past days and events.

O’Leary’s stellar performance includes verbalizing feelings and emotions in dialogue (a memorable scene is one in which Fenton, after being presented by his dad with a list of “daemons”to be destroyed, exclaims “Dad, these are people’s names …”). And he also is superb at expressing them through his gestures and facial expressions (in that same scene observe his face as his dad goes on to explain his visions with “That’s right and they will look like people too, but they are not…”).  Yes, throughout the film, Matt O’Leary is always natural and sincere, which facilitates one’s identification with his character or, at the very least, makes one really care for his fate.

“I hated Dad’s God, and I would have run away if it weren’t for my brother. I just couldn’t leave him there.”

Jeremy Sumpter (a cinematic debut for the young actor) is equally convincing as Fenton’s little brother Adam. And, while his role is more of a supporting one, his character projects a collage of children’s psychological traits: innocence, curiosity and even cruelty at times, all in an impeccable manner. (After watching his performance in Frailty, it comes as no surprise that Jeremy aced the role of Peter Pan in the infamous 2003 live action film directed by P. J. Hogan)

“I did a lot of thinking and praying after you went to bed. I asked the Angel to visit you, instead he visited me. He told me something… that I don’t want to believe.”

The film is atmospherically extremely dense. Its haunting musical score, beginning with the movie’s opening sequence, persists throughout, bewitching the overall mood of the story. Combine that score with beautiful photography (somehow a portrayal of one’s childhood days always manages to retain a degree of beauty and innocence, regardless of the context in which it’s placed), an intelligent script and great direction, this film manages to invoke anxiety in its viewers.

I viewed Frailty twice prior to writing this review and have discovered that the film is perfectly suitable for repeat viewings. The viewer is always able to catch subtle nuances or symbolism that may have escaped one’s attention initially.  Admittedly, the film has a 90s feel to it but, in my book, that’s a good thing and doesn’t lessen the viewer’s enjoyment. In fact by seeing the movie more than once, you’re provided with plenty of things to think about while watching it and beyond — long after the final credits have rolled.

A psychological thriller with strong Coming-of-Age motifs, Frailty is a true masterpiece that deserves to be seen. Highly recommended! 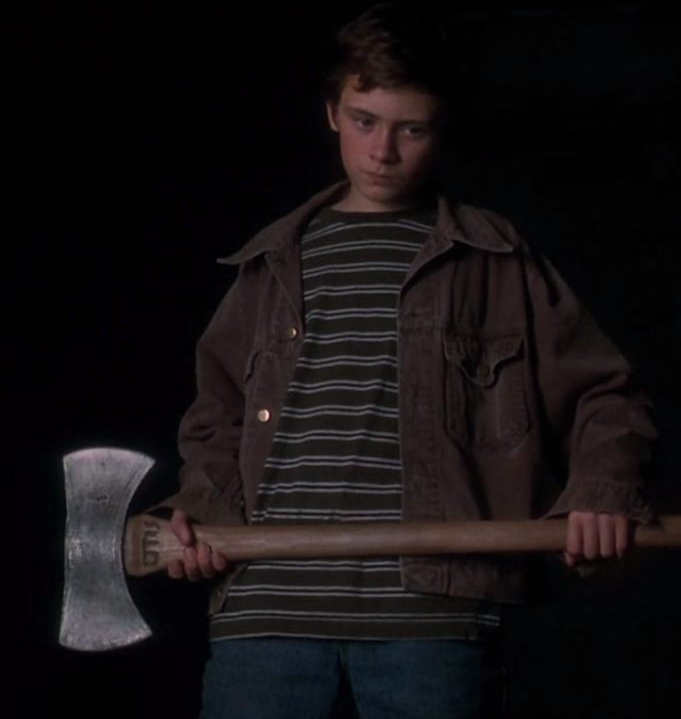 Frailty (2001)
In short
A psychological thriller with strong Coming-of-Age motifs, Frailty is a true masterpiece that deserves to be seen. Highly recommended!
Original story
Great Acting
20 % of the movie is not as engaging ( with the adult Fenton)
4.7
OUR SCORE
Watch on Demand
Amazon
Facebook
Twitter
WhatsApp

A psychological thriller with strong Coming-of-Age motifs, Frailty is a true masterpiece that deserves to be seen. Highly recommended!Frailty (2001)
TheSKyKid.comYoung talent in the movies and the arts