“The sores will heal. They healed before. It’s the wounds inside that will take the longest to….” 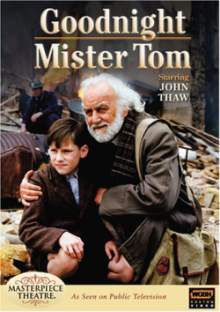 Sometimes I watch a movie and am really impressed by it – and still it is not easy to explain why I liked it that much. This is mostly true for the uncommon movies – the ones one can hardly compare with the rest out there. Goodnight Mister Tom is one of these special movies.

There is a lot of emotion in that movie – and the acting was so good that while watching the movie, I was crying and laughing as the story went on. The young Nick Robinson – is a young boy (William) evacuated from London because of the air strikes there during the Second World War.Mr. Tom played by John Thaw is an old man leaving in the village the evacuated children were send to.

At first Tom refuses to take any responsibilities – such as taking care for a troubled young lad – but accepts since he is left without a choice. During the stay Mr. Tom discovers how horrible the life has been for the William – alongside his luggage his mom sent a belt and written instructions to the host of her son – not to hesitate to use it. This belt is berried in the field – never to be used in such a brutal manner.

Mr. Tom provides a real home for William, and the boy is happy with his new life, he goes to school, makes new friends and discovers hidden talents. All of the sudden a letter William is called home in London with a letter mentioning that she is not feeling well…and it starts all over again – only this time it gets much worse…

There are many feelings you can sense in this movie – love, fear, sadness, happiness, pain, hope – and much more. Goodnight Mr. Tom is another masterpiece of the British cinema comparable only with others such as Dear Frankie and Billy Elliot – if one is to compare. I have truly enjoyed watching it and highly recommend it. Before finishing this review I would also like to mention the great performance of Thomas Orange in the role of Zac – reminded me of a friend of mine from my own childhood ( :