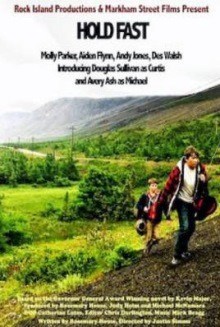 The 2013 Canadian drama Hold Fast, directed by Justin Simms, features a touching story that would appeal to some viewers, while others will be disappointed by the lack of suspense and plot twists. Essentially the focus lies on the rite-of-passage of 14-year-old Michael (Avery Ash) who loses both his parents in a car accident.

Dealing with the overwhelming grief is not the only challenge that young Michael faces. He is taken to the city by his aunt. Her husband is a strict authoritarian who doesn’t take kindly to opinionated teenagers.  At school the city boys are not ready to extend the welcome mat to the small town boy with a cocky attitude. It seems that the only person who understands Mike is his cousin Curtis, who is of the same age, but appears much more innocent and naïve.

Fed up with the problems that surround him, Michel decides to run away. Curtis joins in and soon the two boys are seen hitchhiking on the highway – heading out to the wilderness on “a journey of self-discovery”.

The film is an adaptation of a 2003 novel of the same name, written by the Canadian author Kevin Major. As the action unfolds, one realizes that the film doesn’t offer any distinct take on dealing with grief. The familiarity of the narrative and lack of any significant development of the movie’s characters, are obstacles to its potential to move the viewer.

The film is shot on location in Newfoundland (a large Canadian island off the east coast of the North American mainland). The beautiful Canadian landscapes are shot in such a manner that they become an essential part of the story itself – a character on their own. There is a scene featuring the boys skinning a rabbit, which city boys and others not used to hunting (as well as groups like PETA & SPCA) may find difficult to watch.

The musical score of the film is what I consider one of its best features: moody ballads with meaningful lyrics that combine with the aforementioned excellent visuals to really create a wonderful atmosphere. It’s unfortunate that the story itself fails to deeply involve the audience.

Let’s face it – Hold Fast is not a bad film per se. While I don’t see it attaining the popularity of a Coming-of-Age classic such as Stand by Me, watching the good acting performances of the two young boys in the lead roles and learning about their life stories makes viewing it worth it all by itself.  It’s a simple, but sincere film – and that’s where it appeal lies.