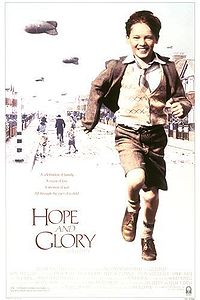 Hope and Glory is a British and American made film, written and directed by John Boorman. It was based on his own life experiences growing up in Blitz, London during  WWII.

The film tells the story of the Rowan family: 10 year old Billy (Sebastian Rice Edwards),  his younger sister Sue, older sister Dawn and his parents, Grace and Clive.  Billy is a very imaginitive  and adventurous boy who often imagines himself in the war.  In the story, Clive goes off to war leaving Grace to take care of everything back home (and she has her hands full).   Just as the first bombs start to fall, Billy and family run outside, acting as if it was a big fireworks show — laughing and pointing, especially Billy who was completely amazed.

Billy, like the rest of the kids, loved finding shrapnel.  One day while Billy was searching for some, he  ran into a group of boys. They didn’t hit it off at first, but soon they invite him into their little gang. To them, a bombed house is a playground.  Finding shrapnel and destroying whatever is left is like a game to them — that is, until Billy finds them at his house after it had burned.  Then it became personal for Billy.  He let the head of the gang know, real quick.  Billy’s mom and sisters watched, not caring how much Billy punched the other boy.

As for the rest of Billy’s family — his older sister, Dawn, had a habit of sneaking out at night to meet up with a soldier boy she had met, while his little sister, Sue, often tagged along on Billy’s adventures.  And then there is Grandpa, a drunken, hateful old coot who doesn’t seem to have any friends.  Most of the family doesn’t like him, but Billy finds a way to connect with him through the game of cricket .

This film was a true joy to see as it has a little bit of everything in it.  There’s lots of   “boys will be boys”   fights and adventurous, but harmless, peeping. It has humor, bonding, and yes, even heartbreak — when Dawn falls for a soldier who has to leave for war.  I’ve never seen a film quite like this before. Oh, I’ve seen many films depicting life during the war, but none quite as adventurous. I have to take my hat off to the director on this one.  It was a brilliant idea, very creative. The cast did a great job. I couldn’t pull myself away and hated when it ended. I wanted to keep watching. There is so much in this film that I can’t begin to tell it all here. If I had to describe it in one word it would be –DELIGHTFUL.  I highly recommend it.