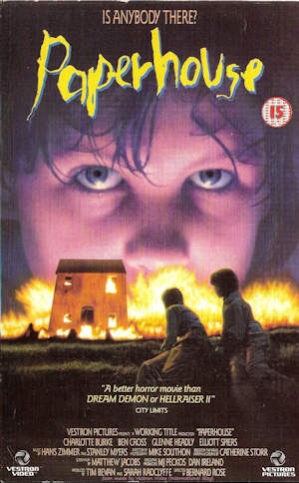 It is all so confusing!

That’s exactly the way I felt as the final credits rolled of Bernard Rose’s 1988 film, Paperhouse! I found myself trying hard to decipher the symbolism of the narrative.

So hard, in fact, that I got tired of it all and wished for the film to finally end, which is not a good sign, and clearly indicated that my cinematic experience was anything but pleasant.

I almost feel bad for disliking a movie that is apparently dedicated as a memoriam of Elliott Spiers, a young British actor who died tragically after having starred in a TV series and a few films – one of them Paperhouse.

Yet I’d rather be honest when reviewing the film than to praise it, as some other reviewers have done, citing “a captivating story, convincing dialogues and good acting”. I didn’t detect any of those and I wonder if the symbolism was a bit too much, or have I somehow completely missed the point of the dark fantasy portrayal central to the story in Paperhouse?

But before I confuse YOU – here is a basic outline of what the film is about:

Eleven-year-old Anna Madden (Charlotte Burke) is an outgoing little girl with a passion for drawing. Somehow everything she draws comes to life in an imaginary world that she visits and experiences in her dreams. In that fantasy world of hers she meets and befriends a disabled boy named Marc (Elliott Spiers), for whom the dream world of Anna is the real one. In her waking hours, Anna discovers that Marc is a real person and, while she has never met him, she feels that she knows him. She believes she could help him by altering the real world with her drawings — drawings that reflect on the imaginary world where she and Marc meet.

I believe that the film tried to capture the child’s imagination and deal with issues such as grief, compassion, memories, and friendship. But the narrative is so much open for interpretation that I completely missed its point.

The film’s visuals – suitable for the portrayal of a fantasy world using exaggerated props, unusual angles and shadows — are one of the few things that leaves a positive impression in me. Another one is the musical score, which included some treble (boy choir) performances that gave off an unearthly heavenly appeal to some scenes. I was not impressed with the actors’ performances and I did not identify with or manage to care about any of the film’s characters. However, I’m willing to attribute that to the confusion that this art-house film caused in me.

In essence, Paperhouse is a female Coming-of-Age movie. There is a reason why I predominately review films with male protagonists as I believe that it’s easier for me to process an identification with the character and that allows me to view the world they inhabit (albeit a cinematic one) through their eyes.

But assuming that I didn’t understand the film, on the basis of my lack of understanding of the female psyche, is hardly realistic.

The film critic Roger Ebert rated Paperhouse highly in his own review of the movie, which ends with the following observation:

“This is not a movie to be measured and weighed and plumbed, but to be surrendered to.”

It almost feels like we have watched different movies as, in my case, Paperhouse left me bored and confused. Apparently, somewhere along the way, I refused to surrender. That is why I can’t recommend the film, yet remain interested in hearing what interpretations and impressions other viewers may of have of it. 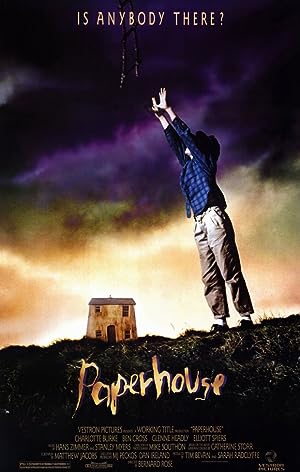 Paperhouse (1988)
92 min|Drama, Fantasy|17 Feb 1989
6.6Rating: 6.6 / 10 from 5,855 users
A young girl lost in the loneliness and boredom of reality finds solace in an ill boy, whom she can visit in a surreal dream world that she drew in her school composition book.
Director: Bernard Rose
Creator: Catherine Storr, Matthew Jacobs
Actors: Charlotte Burke, Jane Bertish, Samantha Cahill

Paperhouse (1988)
CONCLUSION
A female Coming-of-Age movie that tried hard to capture a child's imagination and deal with issues such as grief, compassion, memories, and friendship, but largely fails to do so.
2
OUR RATING
Previous articleThe Dynamiter (2011)
Next articleTom Brown’s Schooldays (2005)

Facebook
Twitter
WhatsApp
It is all so confusing! That's exactly the way I felt as the final credits rolled of Bernard Rose's 1988 film, Paperhouse! I found myself trying hard to decipher the symbolism of the narrative. So hard, in fact, that I got tired of it all and wished for...GeorgiPaperhouse (1988)
TheSKyKid.comYoung talent in the movies and the arts