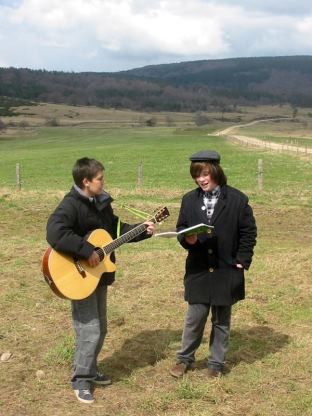 How I Made My Self-Produced EP

For those who don’t know me, I am Shane Foxx, an independent singer-songwriter from France. I am an outsider. And today I’m going to tell you my story about my original music and how I ultimately made a CD of my personal songs, exactly the way I wanted it to be.

First, you have to know that I don’t come from a musical family. Four years ago, I started going to some concerts because one of my friends really liked independent music. He made me discover a whole new universe. I fell in love with music at this time. I enjoyed watching the bands performing live, everybody was very nice, and the musicians made it look so easy. I especially liked a local unknown band called Coming Soon. They had a 14-year-old drummer, Leo Bear Creek, who sang some tunes on the ukulele at the beginning of their show. I was very impressed and envious and I collected all their self-produced albums.

Soon after this, I met Zak Laughed, a 12 year-old local singer-songwriter. He encouraged me to start playing the ukulele too. That is how, 3 years ago, I bought a ukulele and taught myself how to play it while covering the songs of Zak Laughed, Coming Soon, and some other unknown bands, as well as Bob Dylan, Leonard Cohen, Johnny Cash…etc. It wasn’t long before I started to think, if they could write songs, why not me? So I started writing and composing my first songs and it turned out to be fairly easy for me. I naturally chose to write in the English language because I was shy and I didn’t want my friends and family to understand the lyrics. Also because English songs were the kind of music I was listening to. My parents never got involved in my music. In fact, they are not interested in my music, so they don’t even listen to me. It’s something I’m really glad and thankful about, because it helped me stay down to Earth, and they never discouraged me from continuing.

It wasn’t long before I made a YouTube account to upload some covers and share my humble videos with my mates. The nice comments from the community encouraged me to continue. I also started saving to buy a guitar. I finally bought one that was perfect for me, taught myself how to play it, and never stopped writing songs, having jams with my friends, and covering my favorite music on YouTube. To be honest, I didn’t like my songs much.  I always preferred playing others’ songs. I also did some gigs in my city.

One year ago, I thought I had enough songs that were worth including on an EP. For those who don’t know, an EP (Extended-Play) contains too many songs to be considered as a single, but not enough to be called an album. I had plenty of songs to make an album, but I wanted to select the best ones only. Also, I saw my friends making EPs before producing whole albums, so this provided a good example to follow. Plus, albums are so much more work!!

By not being signed onto any label, and by not having a manager or anyone else that would restrict my creativity, I was totally free to express myself and ensure my lyrics were not censored. I never would have accepted changes to my songs anyway, although I am aware they will shock a lot of people. I needed to tell those stories, somehow, somewhere. 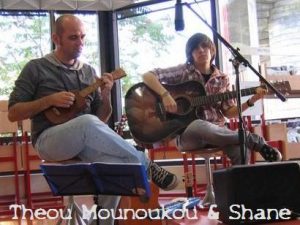 I asked my dear friend Theou Mounoukou to help me record and produce the EP. He is an amazing musician, I admire him so much, and I knew that I could trust him to follow my ideas about how I wanted the music to sound. From start to finish, it took about three months and it was a tremendous amount of work. I had to select the songs, work with Theou to arrange them (because of course they were pretty raw), and then we recorded them with Theou’s home-studio equipment. I consider myself very lucky to have had the opportunity to record my EP with Theou, because the sound was as clean as it could be (considering it’s recorded at home). I never was worried about the quality of the tracks, because many amazing artists that I admire such as Stanley Brinks, Daniel Johnston..etc produce great lo-fi albums. It was the sound I was searching for, to be honest. In the end, it had to be something very humble, very true, that fit my goals and my personality.

We recorded all the songs during the summer 2010, as I was very worried about my imminent voice change. Usually we recorded my voice and instrument at the same time (many artists would tell you that’s a sin) because it captured my emotions, and was much easier for me. Then we recorded all the additional tracks. We did some try-outs. My friend Sleipnir recorded his parts on one duet song and sent them to us via Internet! Mixing and mastering the recorded tracks took a lot of time. Theou did the most of it, while I gave him my opinion on what I liked. I’m very blessed to have had Theou included in this project because, without him, nothing would have been possible.

As the EP was being finished, I created the cover design. It was ‘my baby’ so I had to do it myself!! I was satisfied with the self-portrait drawing I used because it expresses the feelings of the songs very well. As for the order of the songs, we looked at the instruments in them, and their key, so the listener would not feel like they are all the same. Here again, I’m probably not the best judge about my songs because I don’t especially like them and I think they all sound the same (but after all it’s my style/signature). We eventually settled on a good order. 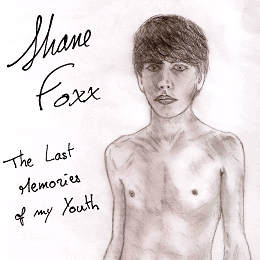 For the title, my EP is called The Last Memories of My Youth for several reasons. It is indeed a big shout-out to my friend Zak Laughed who influenced me a lot through these years. His album is called The Last Memories of My Old House – I suggest you get it!! The title is significance for another reason. As I mentioned earlier, I needed to make this EP before my voice changed, because the songs are quite ‘old’, as I wrote them between 2007 and 2010. I really wanted to have a proper souvenir of my treble voice, something I could keep like a family picture, something personal and beautiful. Music is very important to me now and I was afraid I would lose my voice and be unable to sing in the future.

This EP symbolizes a new start in my life. I can turn the page and start a new chapter, looking forward to better things. I will no longer get bothered by some things in my past that I wrote about. Now I hope to obtain a banjo, a piano, or a violin and teach myself how to have fun with them. I’ll give myself some years to mature and to write new songs, and maybe in the future with my grown-up voice, I’ll record an album – which will be very influenced by Chris Garneau or Scott Matthew music I am sure.

I am no longer afraid to lose my voice because I’ll always keep singing no matter what. Before it happens, I’m gonna record another home-made CD with covers of my favorite artists and it will be available for free on my website. I will also continue uploading covers on YouTube on my personal channel or on my music collaboration channel every Tuesday.

To conclude I would say that I’m not really an outsider. I just followed my dreams the way I wanted. I wouldn’t accept signing a contract. There are many young independent artists like me out there. I could name my mates Eric Bradford, Robert Borden, Jessarae, Lex Lamber (and his band: Throw Television), Luke Paul Jackson, Ryan Cassata, and many others! My message to every young singer who wants to get started is that no matter the number of fans you have, if you are not signed onto a label, if you don’t have a vocal teacher, or anything… as long as you have a passion, just go for it! Nothing should stop you!

The article above was written by Shane Foxx himself. You can find out more about him and his EP by visiting his website and/or reading the exclusive interview he gave for theskykid.com in June , 2010.