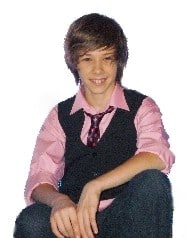 Get ready for a young talent who is going to take the world by storm.

Like many young stars these days Dima, who hails from the Ukraine, was spotted on YouTube.  For the past few months, Dima has been working with a music producer from England.  Nowadays the artist no longer needs to be in the same geographical area as his vocal instructor and adviser,  which comes in handy.  For the past five months, Dima has been learning new singing skills over Skype.

His producer shared his first impressions with us:  “I am always trying to stay ahead of trend and didn’t want to discover another Justin Bieber.  This singer had a great raw talent that I knew could be something special with the right training.  Also, having seen the many videos he had on his YouTube, I knew teenage girls would love his personality.  After all, a great singer with zero personality will never become big, no matter how good his voice is.”

Dima’s first single, titled Gone, was just released — a catchy pop song with the potential of becoming a hit in the summer of 2011.

Dima will be recording new songs, all in English, in the coming months.  He will also film  four music videos this summer all over Ukraine.  So get ready for some great watching/listening experiences. The plan is to release an album this year with all original songs. The style of music Dima sings will be varied to bring a fresh angle on pop music.

Get to know Dima!, I think you’ll like him. A lot.

and find out more about him at Rivenmaster.Com