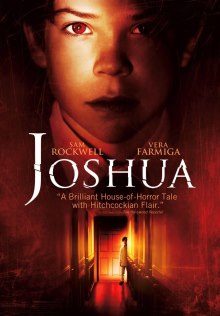 The 2007 film Joshua is one of those movies with an intriguing first set of scenes, which raises the expectations of its viewers.  But alas! After those scenes the film then degenerates into a rather bland drama with a minimum amount of suspense or action. I expected a horror film and, while being aware that a film does not have to be gory in order to scare, I had hoped for at least some physiological tension to maintain an engaging narrative. Instead, Joshua offers a character based drama about a manipulative boy (I hesitate to call him “evil”) who feels neglected when his baby sister is born.

The plot of the movie is not very original; we have all seen films about sibling jealousy and even about a young boy who turns “bad” in order to protect or change the state of affairs in his family (the most obvious examples are The Omen movies/or The Good Son). Yet, on a positive note,  the filmmakers make up for the lack of any surprising story twists with innovative sound design.  There are sounds you would expect to hear in a horror flick combined with piano pieces that act as both a part of the story (the young boy is a piano virtuoso) and a storytelling device that links scenes to each other. Nico Muhly‘s immaculate musical score brings tension and contributes to the haunting atmosphere that prevails throughout the movie.

The other positive feature of the film is the overall excellent acting performances of the entire cast and especially of young Jacob Kogan in the role of Joshua. Jacob’s appearance emits innocence, but somehow one senses the alternate personality behind the tidy, erudite boy. His character develops and transforms throughout the story. Yet, when the final credits rolled, I was still unable to determine all the motives behind Joshua’s  disturbing behavior.

It seems unfortunate to me that one can only get enjoyment from a George Ratliff movie after repeated viewings. The first time I watched the film, I got bored and distracted within the first half hour of the nearly two hours play time.  But after I watched the film a second time, I began to appreciate some of the nuances of the film and its actors’ portrayals.