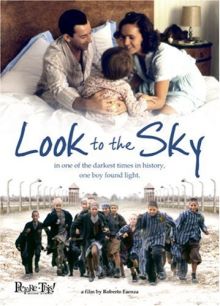 As soon as the film started rolling, I knew I was going to spend a great deal of time with tears in my eyes. And I was right.  By the sixth minute, I was fighting tears back. Look to the Sky is a drama based on the autobiographical novel Childhood written by the Dutch writer Jona Oberski. The action opens in Amsterdam where Jonah, a little boy of five, is living happily with his family. Jonah narrates the story (first person narration is the best way to approach a movie adaptation of an autobiographical novel) and one immediately feels a closeness to the little boy, which makes the scenes that follow all that much harsher to watch.

When the soldiers come, Jonah’s world changes. His only fault…he is Jewish. Jonah’s parents try their best to shield his innocence and succeed for a while. Unfortunately, despite the optimistic viewpoint of this young child through whose eyes we watch the action unfold,  viewers are well aware of the events of WWII and there is an uneasiness watching the film. When the family is removed from their home and sent to a temporary holding place, the tension grows.  Yet Jonah and his parents still have hopes that the visas for Palestine they hold will guarantee their freedom.

The day comes for them to leave the temporary place.  But instead of going to Palestine, the family finds itself incarcerated in the Bergen-Belsen concentration camp. That’s the place where little Jonah will grow up, separated from his father and encouraged to “look to the sky and never ever hate”. 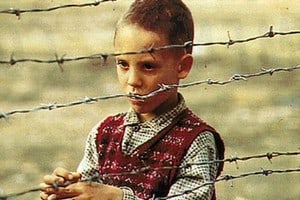 You will recall two other Coming-of-Age masterpieces that also give viewers a peak into the horrors of The Holocaust from a child’s perspective: The Boy in the Striped Pajamas and The Island on Bird Street. Both are memorable, not only because of the story they tell, but because of the extraordinary performances of  the young leads Asa Butterfield and Jordan Kiziuk.  Look to the Sky is no exception in that regard. But unique in Look to the Sky, as the action focuses on two periods of Jonah’s life, we have not one, but two actors with marvelous performances.  They are five-year-old  Luke Petterson who portrayed Jonah at that age and Jenner Del Vecchio portraying Jonah as an adolescent. I was especially blown away by the acting talent of the young Luke Petterson.  It’s hard to imagine that someone as young as five could conduct himself in such a professional manner in front of the camera.

The plot is filled with story twists that keep the viewer engaged and moved with each new development.  Ennio Morricone’s score  is moving on its own, featuring calm piano music and darker, sad themed pieces accompanying the most dramatic moments of the film.  An emotional rendition of the ancient Jewish song Gam Gam, performed by a children’s choir, is the most memorable piece from the film’s soundtrack.

Look to the Sky Official Trailer

The majority of the film is in English, with the exception of some short dialogues in Serbian, Bulgarian, Russian and Yiddish. The only other language, other than English, with a significant presence is German.  And, while that dialogue is not translated, as soon as the initial confusion wears off, you won’t feel the need for a translation.

Look to the Sky is a powerful Coming-of-Age drama. While it takes its toll on the viewer’s emotions, I believe it’s a must see for everyone. The film is highly suitable for educating young people about the rite of passages children their age went through in this horrid period in human history. 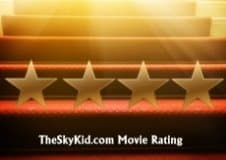