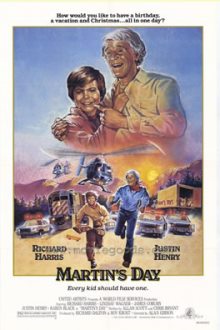 Many classic Coming-of-Age films were never released on DVD and, with the disappearance of the VHS format, such films are harder to be seen and appreciated. Thankfully, after the 1985 film Martin’s Day was recommended to me by another reviewer, I was able to obtain a copy.

The film relates the story of an unlikely relationship between an escaped convict and a young boy he kidnaps while on the run. Starring Richard Harris and Justin Henry (Kramer vs. Kramer) in the lead roles, the film offers exciting adventures, dramatic tension and surprise plot twists.

The pace of the opening seemed slow.  It’s as if the director wanted to make sure the audience gets to know the personality of the main character. Yet initially, the less than convincing editing results in confusion about what the subject matter of the film really is. As the plot develops, however,  the story starts making sense and, by the end of the film (and most notably in its final scene), we witness significant improvement in editing in relation to the juxtaposition of times, mood and settings.

There are different ways in which one may perceive the film’s story. Some may decide that it exemplifies traits of the Stockholm syndrome, as the kidnapped boy expresses empathy and sympathy toward his captors. And one can’t completely disregard such opinions, especially since by the end you are likely to find yourself rooting for the villain (I know I was).

But my opinion is that the real goal of the film was to show that the boundaries of inter-generational friendship can be eliminated if people see in others the person they are.  In other words, see where a person is presently, not where they were or where they will be. This is best seen when the psychologist assigned to the escaped convict tries to explain to the policemen in charge of the case the seemingly incomprehensible behavior of kidnapper and kidnapped:

“For a first time, this kid has found somebody who doesn’t give a shit about the rules.  A friend who probably listens to him, who scares him, who likes him and who definitely never says ‘what the hell do you want? You are just a kid!’ They have both broken out of prison!” 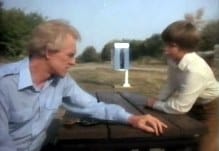 Many Coming-of-Age films that feature inter-generational friendships incorporate dialogue filled with wisdom, as the older character shares his experience with the youngster (and sometimes vice versa).

Some, like the Scott Hicks’s film Heart of Atlantis, end up serious and dramatic while others like Alan Gibson’s Martin’s Day rely on swifter action, tension and humor to keep the interest of their audiences.

Admittedly, I was afraid of a predicable ending, but thankfully Alan Gibson once again proved that my initial judgment of his directing skills was wrong. While the film was enjoyable (after the first 20 or so minutes), it is the ending that makes me recommend the film.  I’m positive that you will appreciate its story, the conflict and its resolution!

If you have seen the film or plan to see it you may also enjoy its tribute site  available at martinsday.com