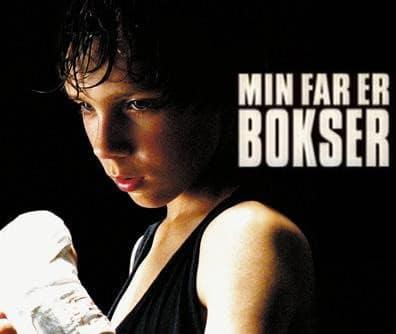 Min far er bokser (My Dad Is a Champ) is a short film directed by Morten Giese.  What drew me initially to this Scandinavian short film was the fact that Frederik Christian Johansen stars in it. You may remember Frederik Christian Johansen from my review of En som Hodder. He made a huge impression on me in that film and his performance in “Min far er bokser” only confirmed my firm affirmation of his talent and acting skills.

In the film, Frederik Christian Johansen plays Stefan – a ten year old boy who practices boxing, following in the footsteps of his father who, as far as he knows, is a boxing champion who competes on the international stage and travels almost all the time.  The passion of Stephen reminded me of myself doing handball – playing at the same position my dad did when he was competing.  Stephen’s case however is a bit different – as he hasn’t seen his father in years. On his tenth birthday, Stefan doesn’t get the usual package in the mail from his father and he decides to go find him. Will he succeed in his quest?  What would his father say?

The cinematography of “Min far er bokser” has a different style than the one typical for many Scandinavian films. Instead of vivid colors, the director decided to use more subtle ones, with a lot of shadows. The story has been done before (I can think of at least several things sharing a similar plot) – yet however feels distinct to the film. While I was watching it, my eyes filled with tears in one of the final scenes – and that’s a clear signal that the movie evoked emotions in me – which on its own means that it must be good. If you have the chance to see this short film (25 minutes)  – do it – I highly recommend it .

My Dad Is a Champ (2005)
25 min|Short|14 Feb 2005
7.1Rating: 7.1 / 10 from 37 usersMetascore: N/A
Stefan hasn't seen his father for years. All he knows is that his father is a boxer who travels all over the world. Stefan boxes, too, like his father. He misses him a lot. On his tenth …
Director: Morten Giese
Creator: Morten Giese, Mette Heeno, Annette Herzog (idea)
Actors: Danny Hjørdrup Leisten, Janus Nabil Bakrawi, William Hagedorn-Rasmussen, Frederik Christian Johansen