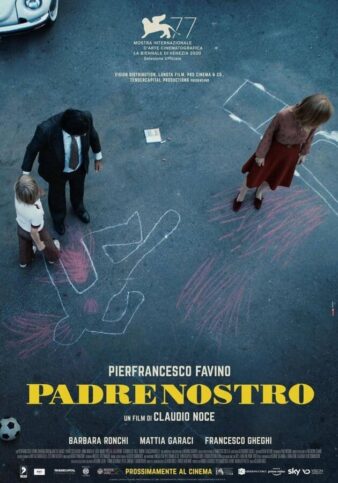 Based on real events, the 2020 Italian film Padrenostro tells the story of 10 year old Valerio (Mattia Garaci), whose life is is turned upside down when he witnesses the attack on his father (Pierfrancesco Favino) by a group of terrorists.

It may take more than one viewing to grasp the story’s nuances, but the beautiful aesthetics and exemplary cinematography more than compensate for the time invested.

Cinematographically, the film is a real masterpiece. The cinematic techniques help fill in details about the life of the young Valerio , such as a scene of the boy as he is made to stand in front of his class. At the same time, his father is proclaimed a hero by their teacher, with a highly stylized zoom out transmiting a sense of isolation or selective focus That technique is used in other scenes to achieve the same effect. 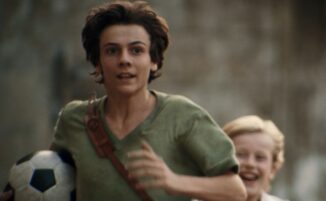 Before meeting Christian (Francesco Gheghi), Valerio thinks of his father as his only friend in the world, which explains why he is so shaken after the terrorist attempt against him.  If anything were to happen to his father, Valerio would be in danger of being alone in the world.

The character of Christian is intriguing – an older friend whose presence and influence reflects on the ten year old Valerio in a liberating manner. However, due to his sudden appearance in the younger boy’s life, and his persistence to remain part of it, the viewer may never shed a suspicion about Christian’s motives for befriending him.

Many of the scenes are felt poignantly as the camera points directly at the young actor’s face. In one scene, we feel as if we can peer into his eyes. In others, we read his emotions directly– no words needed. This speaks volumes about the talent of Mattia Garaci and that of the director who has managed to extract such an emotive performance from the young actor. Fortunately enough that’s the case, as Mattia is present in almost every scene of the film – a fact that devotees of Coming-of-Age cinema will greatly appreciate.

Whereas it is doubtful that many viewers will be able to identify with the film’s protagonist due to the specifics of his family situation, and the time period in which the action is set, identifying with his experience of finding a real friend is plausible. I could not help but notice a few of Charles Dickens’s influences on the narrative of Padrenostro as the streetwiseness of Christian and the naïve/good-natured Valerio reminds one of the Artful Dodger and Oliver Twist. Friendship turns into a central theme of the film. And, while some viewers may miss the significance of the opening scene in that regard, it is easily graspable upon repeated viewing.

The musical score predominately comprises a mixture between classical pieces and Italian songs– either subtle or rousing as the scene requires. More frequently than not, the sound is used to create suspense, raising the tension toward an expected major event, an event that never really materializes. But despite the fact that nothing that dramatic happens, the fact that one expects for it to happen makes one more attentive to the story. The end result is a better understanding of the characters by better gauging their emotions as the result of that increased attention.

Padrenostro lacks the dynamics of other recent Italian Coming-of-Age dramas such as Stolen Days (Original title: Il ladro di giorni), but the viscous fluidity of the action more than compensates for that.  Essentially the film is about childhood, with organized crime (a theme ever-present in some of the best Italian narratives) assuming a background position.

The production design, cinematography, camerawork, musical score, and acting – all of the cinematic elements combined – result in a powerful portrayal of growing up in a tense environment and overcoming the trials and tribulations of life. Padrenostro is an excellent Coming-of-Age drama whose only flaw is the unnecessarily long screen time.

Padrenostro (2020)
In short
The production design, cinematography, camerawork, musical score, and acting of Padrenostro – all of the cinematic elements combined – result in a powerful portrayal of growing up in a tense environment.
Character/Acting
Score/Soundtrack
Cinematography
Storyline/Screenplay
Production
Direction
Reader Rating4 Votes
4.8
Our rating
Previous articleChance (2020)
Next articleChicken Boy (2019)

Facebook
Twitter
WhatsApp
The production design, cinematography, camerawork, musical score, and acting of Padrenostro – all of the cinematic elements combined – result in a powerful portrayal of growing up in a tense environment.GeorgiPadrenostro (2020)
TheSKyKid.comYoung talent in the movies and the arts