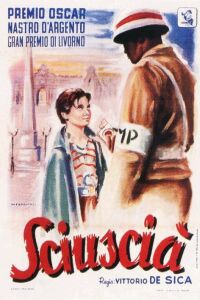 If you’re a frequent reader of TheSkyKid.com, you might have noticed that a great many of the movie reviews published on the site in 2011 are of new releases. Naturally, when a movie is in the theaters, the interest toward it is significantly higher than of one that can be only found on a DVD. Each genre in cinema has its timeless classics, including the Coming-of-Age genre. These classics are likely to present you with a whole new world of cinematic experience, intriguing storytelling, and, last but not least, in many cases its those classic films that have inspired filmmakers of the present day.

The Film Stage recently published a great article written by Jordan Raup entitled  10 Classic Films You Must Watch Before Seeing Martin Scorsese’s ‘Hugo’. The article is aimed at both “diehard film fanatics and those just discovering the wonder of early cinema.” The 1969 masterpiece François Truffaut film 400 Blows inspired many of today’s films about adolescence and troubled youth. And François Truffaut himself was influenced by the works of the Italian director Vittorio De Sica, whose movie  The Bicycle Thief was cited by Turner Classic Movies as one of the 15 most influential films in cinema history. So today I decided to review one of  those classic films of the Coming-of-Age genre directed by Vittorio De Sica – the 1946 film Shoeshine.

Postwar Italy. The streets of Rome are packed with children who work in order to earn a living and support their families. The two young protagonists of the film, Pasquale and Giuseppe, are best friends who make money by shining the shoes of the American soldiers who roam across the city. The boys work hard to pursue their dreams. And their greatest dream is to buy a horse, something they could actually take care of and call their own. Money is in short supply, so the boys happily agree when they are asked to help Giuseppe’s brother deliver some stolen American blankets to a customer in the city. The boys complete their task, but it turns out that Giuseppe’s brother and his partner took advantage of the boys, in their eagerness to make money, by using the delivery of the blankets as an excuse for the adults to enter the customer’s house while pretending to be policemen investigating the black market of stolen goods. Pasquale and Giuseppe are instructed to keep silent…

The real police authorities launch an investigation. The boys are recognized by the old lady who was scammed while attempting to purchase the army blankets. Brought in front of a commissar, they keep their promise and refuse to identify the adults who sent them to deliver the blankets. The next thing they know, they’re in a police car on their way to a juvenile prison, where they’re to remain until the investigation is over (it’s made clear that some investigations can last for years).

The juvenile prison in post-war Italy is not much different than its adult counterpart. Children as young as ten spend their days behind bars in cramped tiny cells. This harsh environment is the scene where the boys will soon lose their innocence, corrupted by the intrigues of their cellmates and prison guards. Their friendship is at stake… 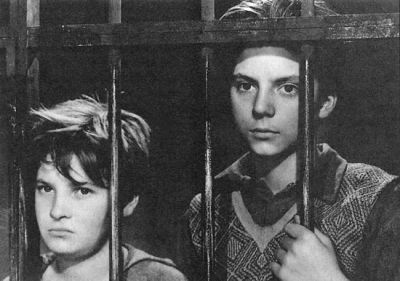 The performances of the young Rinaldo Smordoni as Giuseppe and Franco Interlenghi as Pasquale are what made the biggest impression on me. The movie’s director, Vittorio De Sica, made sure that the narrative closely followed the two young boys and the transformations that occurred to their personalities once they were locked in the prison.

This 1946 film was shot in black and white as one might suspect. In the case of Shoeshine, the lack of color truly emphasized the gloomy atmosphere of the prison and the emotions of the two protagonists. Nowadays, you can witness a similar effect in some art-house films, sometimes shot purposefully in black and white. For someone used to color in movies, seeing the dramatic shades and shadows of the black and white image is quite a distinct experience. The film’s soundtrack is memorable,  but I don’t have any comment on it aside from the fact that the music seemed oddly familiar.

The ending of the film is unexpected and dramatic. It reminded me of the ending of another classic Coming-of-Age film This Special Friendship (1964). Overall, I enjoyed Shoeshine. Admittedly, I started exploring classic titles and am gradually getting accustomed to them. Some can feel odd or weird at first because of the years that separate the viewer from their release. Yet my experience is that Shoeshine is as touching, emotional, and poignant as the recent releases reviewed at TheSkyKid.com