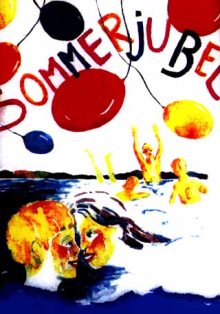 Though Scandinavians have produced some weird movies, they also make the most honest films about growing up. My Life as a Dog (1985), Barnens ö (1980), and Benny’s Gym (2007) are just some examples that come to mind when thinking about Scandinavian Coming-of-Age movies. Most of the films have been adaptations of children’s novels.

Such is the case for the Norwegian short film I have elected to review: Alexander Røsler’s Sommerjubel (Joy of Summer). Aimed at children, the film has received recognition at several international festivals: the Norwegian Short Film Festival of 1985, the Chicago International Festival of Children’s Film, and the Kinderfilmfest in Berlin, both in 1986. Like most Norwegian children’s films produced in the 80s, Sommerjubel is not a serious drama or a suspenseful thriller, but a comedy filled with little jokes and charming scenes – light entertainment at its best.

The storyline is quite simple – the summer adventures and discoveries of several 10-year-old kids. They go skinny dipping (isn’t it too cold for that in Norway?), play together, and discover the wonders and confusions of growing up and changes in how they perceive the opposite sex (girls are not that gross after all, are they?). As a separate plotline, we follow the father of a pair of brothers falling in love with their teacher. That provides a sweet but comic parallel about falling in love at any age (the confusion and red cheeks seem permanent throughout Life).

And what can be more innocent than the way an eight-year-old thinks about the meaning of the expression “sexually mature”:

“What does sexually mature mean? Maybe it’s like apples and pears. When they are mature, they fall.”

I have to admit that some humor was lost on me (like the horse sounds when the father starts up his favorite Volkswagen). But then again, Scandinavians always embed some surprising abstract element in their films (like fantasy scenes)  that make them seem weird yet unique in a special way.

Though you should not approach the viewing of Sommerjubel with big expectations, it’s a film that will probably remind you of moments from your own childhood, which is one of the reasons many people enjoy Coming-of-Age films in the first place. The humor may be lost on adults, but I suspect it will be caught and enjoyed by younger audiences. Overall, Sommerjibel is a cute film focusing on childhood innocence, curiosity, and exploration.

A short clip from the movie :