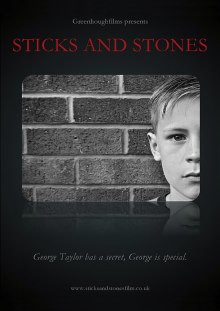 One can always count on finding true cinematic gems from among the independent productions. My latest discovery is the short film Stick and Stones in which an 11-year-old boy, George Taylor, narrates the story of his life.

He is different from the other kids – has no friends and doesn’t really want any. George is happy on his own – an introvert, a weirdo or perhaps just a normal kid who tries to make sense of the world in his own way. His mother says he is “special”, while his dad is angry and worried that his son is …different! Everyone wants to intervene – but George will have nothing of it. He has a secret…a secret that he knows will solve his troubles and show everyone who he really is.

Most of the film is narrated in a daunting tone by its protagonists. The young Jack Greenhough as George manages to convey all the right expressions – indifference, determination, and a subdued anger. As a result, George Taylor’s private world attains real dimensions. I felt a connection to some of his thoughts – which turned out to be worrying and disturbing of itself as the story developed. The horrifying fact is that I have no doubt that most viewers will connect too.

The editing and the overall cinematography left me with mixed feelings. While the scenes with George by himself felt authentic and powerful, the scenes in which he was shown interacting with people in his immediate surroundings felt a bit forced – overacted and the dialogue was less than convincing.

The musical score is comprised of two songs: a mellow and melancholic electronic piano melody played throughout the film (Kevin MacLeod – Light Thought) and the song, Mistake, by the American singer/songwriter Moby. The latter song played at the end as the final credits rolled.  With its lyrics, it almost felt like an accusation and it did a great job of summarizing and explaining the whole narrative on its own.

Whatever your expectations are about the film,  Stick and Stones won’t leave you indifferent. Recommended!

Watch the entire short film below :