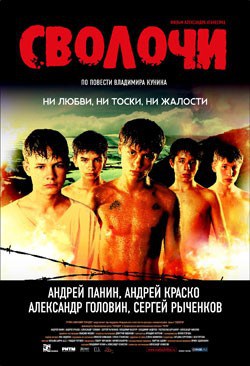 Svolochi – a masterpiece of the Russian coming of age cinema

Recently I have noticed that the Russians began to make perfect movies – and Svolochi is for sure one of them. The action is really moving – while the viewer has a choice – to sympathize with the young criminals who seemed doomed to die or look at them from a different perspective. Some of the boys were caught committing crimes such as murders, and they were given a chance between death and training in the military, preparing them for risky missions behind the enemy lines. The movie does not do very well on the realistic scale but seeing it is worth it as it has some quite emotional moments, and the acting was pretty decent.  When cinema portrays the realities of war – the use of a child as a point of view, as an image is often utilized to drive home the destruction and desperation. The Russian cinema includes some of the best coming of age stories through which the legacy of war and genocide is explored – films such as Svolochi, Tarkovski`s Ivan`s Childhood (1962) and the 1985 masterpiece of Elem Klimov Come and See draw painfully, but also realistically the image of ” the child as a victim of war – traumatized participant in adult hostilities.” (1)  The music in the movie is really nice – I have been listening to the theme song over and over again – you can listen to it at the YouTube video posted below :

Coming of age movies: Growing up on the screen