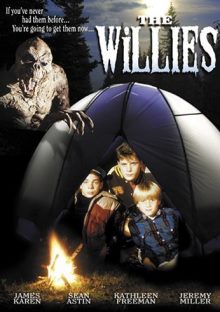 Some movies from the 90’s are worth watching again …and again. The children’s horror film The Willies, directed by Brian Peck, is not one of them.

In this film, three kids try to scare each other by sharing horror stories while camping out in the family’s backyard. The stories are awfully clichéd – monster living at the school bathroom, an old man getting scared to death during a ride at a Haunted Castle at the fair…etc.  So I found it quite challenging to get through the whole hour and a half of cheesy acting, amateur cinematography and pretend scares.

The film is clearly aimed at young audiences, but anyone over six is likely to be really bored half-way through it.  Some of the movie’s actors have grown up to be much better professionals later in their careers – like Sean Astin, who delivered an excellent performance in the films of the The Lord Of The Rings trilogy. In addition, I was rather surprised to find his name in the cast of an acclaimed 1985 Coming-of-Age movie The Goonies (he played  Mikey). Then, remembering that  Steven Spielberg wrote the story of The Goonies, it all made sense.

A clichéd, flat story has the full potential to ruin the experience of any film, and that is exactly what happened in The Willies. When you see this film (if you are really willing to waste the 92 minutes to do that), you will feel just as one feels when buying a ticket for a country fair haunted house – taking a ride in it – getting out and thinking ” That’s all there is? What a money waster!   I should have gone on the ferris wheel instead!”