When you are six – things are simple. You like a girl, you kiss her (or kick her – as some do). Yet, with the passing of time everything gets a bit more complicated. At nine – if you fall in love, boy aren’t you in for an adventure …

If you don’t believe me, check out the 1999 Danish short film Theis and Nico (original title: Bror, min bror) in which two boys, Theis (Aksel Leth) and his younger brother Nico (Maurice Blinkenberg-Thrane), discover the wonderful world of girls, love and kisses after a poster of the classical love drama Gone With The Wind piques their curiosity.

When the brothers meet the beautiful Giinjha (played by Tess Thorsen),  a girl who invites them to her birthday party, they get a chance to put theories into practice. But will they have the guts to do so?

Aimed at young audiences, Theis and Nico is a funny and heartwarming film that be equally enjoyed by viewers of all ages. And who knows? Maybe the viewer might learn some tips on kissing: “use your tongue, your lips must be wet” and that a kiss can be a perfect substitute for a birthday gift (especially if you are nine). 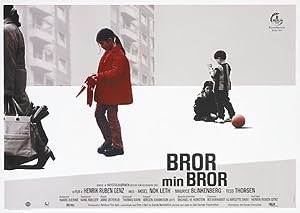 Bror, min bror (1999)
20 min|Short, Family|11 Nov 2000
6.8Rating: 6.8 / 10 from 68 usersMetascore: N/A
The two brothers Theis and Nico find a poster from "Gone with the Wind" and they start talking about why people kiss and the techniques behind it. Later they meet Giinjha and she invites them to her birthday-party. While they are pre
Director: Henrik Ruben Genz
Creator: Michael W. Horsten
Actors: Aksel Leth, Maurice Blinkenberg-Thrane, Tess Thorsen
Share
Facebook
Twitter
Pinterest
WhatsApp