2 Boys are Marcus and  Sondre from Norway

Last month I introduced Marcus and Sondre, who call themselves 2 Boys, on Rivenmaster’s Place.  These boys are more than just a sibling duo who can sing and perform, but they are fast becoming Norway’s most popular young pop group and are really attracting the medias attention!

Marcus (13) and Sondre (10) have just finished several appearances both on television and on stage (with large crowds in attendance) and continue to be the most talked about young pop group in the country. Their popularity really exploded after their appearance on the MPG JR Norway Contest. 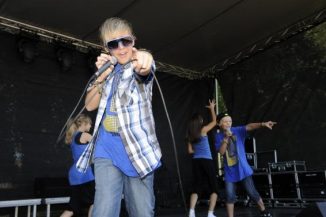 They have already released their first CD called Be Yourself, which can be purchased at CDON.com, I-Tunes, and, Platekompaniet.no.

They have been so busy doing live performances this summer that it has been hard to hold them down long enough for an interview. This past week I finally caught up with them and asked them the following questions:

Rivenmaster: I understand why you named your group 2 Boys, but who actually gets the credit for naming your group?

2Boys : We had a lot of naming proposals but it was actually  our father who came up with the name 2 Boys.

Rivenmaster: Your group is probably best known for your appearance on Melodi Grand Prix Nordic. What was that experience like and can you tell us a little about the back stage events and people you met during that contest?

2Boys: First and foremost, this was a dream come true. We had long dreamed of one day to stand there and suddenly we were a finalist. We will never forget the day we were told that we were ready for the final in Oslo Specktrum. Participation in the Eurovision Song Contest Junior Norway has given us so much experience and many new friends. we have learned that there is so much to think of before finally standing on the stage. we have also learned a lot about how to deal with the media. Norwegian Broadcasting (NRK) was very good at teaching us this.

Rivenmaster: What do each of you enjoy most about your involvement with Sandefjord Theatre Association?  What theatrical performance was the most enjoyable for you?

Sondre: I like when we have performances for the public.
Marcus: I like best to be involved in performances. Trying different role characters is always fun. 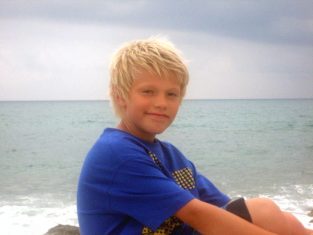 Rivenmaster: Sondre, can you tell us more about the award that you received when you were nine years old from Sandefjord?

Sondre: It was a talent contest in our hometown  Sandefjord. It was called Sandefjord talent and is held every year. I took cover with the song When You Look to Me by Celine Dion.  The participants were of different ages and I was the youngest to have won this competition.  It was incredibly fun.

Rivenmaster: This is for both of you?  Of all the songs you boys have written, which is your favorite and why?

Rivenmaster: The song You and I was largely written by Marcus is that right?  Can you tell us what inspired the lyrics for this song and how this song became a catapult for your being discovered on a National level?

2Boys: Yes, but Sondre also helped a lot with the words to the song You and I. When we make songs, we always find the melody first with the chords on the guitar. We often find the chorus first and we’ll create the text based on that. The text is all the more about us and how we live together as brothers, so it was not so difficult. That the song was a catapult for us nationally is probably because the Melody Grand Prix Junior is a big event in Norway. It is covered in the mass media such as newspapers, radio and sent directly to the largest television channel, NRK, in prime time on a Saturday. I think that the broadcast was seen by nearly 800,000, plus it has been rebroadcast. And today it is played constantly on radio.

Rivenmaster: I really like your song  A World that you performed on Norway’s Got Talent!  Can you tell us a little about what went into the writing of this song and who came up with the thought to do this song?  What would you like to convey most through this song to the world?

2Boys: It was not really so difficult to be inspired to create the text to the song. Environment and increasing pollution around the world is something we constantly hear about at school and in the news almost daily. We know that the world, just by making small simple things together, can improve this situation considerably. This is what we want to convey that each of us can help the earth is still a place we can live on. 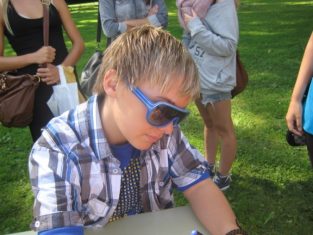 Rivenmaster: Marcus, can you tell us more about Youth Culture?  What exactly is that? I understand you’re a three-time finalist for this event and actually received a scholarship this past year for your singing talent.

Marcus: Youth culture is not really a contest. It is an event where all young people from 10 to 20 years can participate. You can participate with almost whatever you like: singing, playing instruments, rock band, read poetry, etc. Anyone who has dreamed of standing on a stage can here get a chance to do so. A few in different categories are elected on to the county final. I have participated three times and all the times moved on to the county final. I also received a scholarship for singing talent. From this I bought a new guitar which I still use.

Rivenmaster: Of all the events and places you boys have performed over the past couple of years, what was the most exciting?

2Boys: Although we have experienced so much in recent times, there is the performance of the song You and I on live TV and nearly 5000 spectators present who cheered and clapped.  Dette Debye was the national and the excitement we had, we will never forget. But the performance of the song A World, with the acoustic guitar, in front of judges and 1200 spectators, who stood and applauded throughout the song, we will never forget. It was only the second time we played guitar together on one stage and we were so nervous.

Rivenmaster: If you could perform with anyone in the world who would you like to perform with?

2Boys: That’s difficult to answer, for there are many we might like to act with. But right now it is the band A1. We saw them perform live at a music festival, where we played as well. They were very good live performers. Even if they are pop stars, they were incredibly down to earth and took time to talk with us.

2Boys: Summertime is an entertainment program that broadcasts three days a week on one of the two biggest TV channels in Norway. The program has about 1 million viewers per broadcast. The program focuses on current news, celebrities and artists perform live. So we were lucky that we could perform the song Forever I Love You and answer a few questions about our CD album, Be Yourself. There are many artists who want to perform there, so we were glad we got to do it.

Rivenmaster: Moving on to your new CD that was just released this past month!  You have 10 songs on this collection.  Tell us a little about the CD and how your fans can obtain it!

2Boys: Our CD provides, as you said, ten songs. Two of the songs are cover songs by Declan and the Kelly Family. Both of these cover songs are wonderful songs we think have very good texts and melodies. The producer, Henning Hoel Eriksen, created the songs Hey Now and Girlfriend. Both are songs we like to sing. Hey Now we liked once we heard it and agreed when he asked if we would sing it. Girlfriend was made during the course of the studio.  The six other songs we’ve both melody and lyrics in cooperation with the producer.

Rivenmaster: Who designed the Cover for your CD?  Can it be obtained as a physical CD and how can they be ordered?  Are there any plans on selling an autographed version of this CD?

2Boys: Ernst Erdmann designed the cover of our CD. Sunniva Engvoll established the logo. Yes, the physical CD can be purchased online at CDON.com, I-Tunes, and, Platekompaniet.no. Because of the demand for physical CDs to other countries, we are now working to achieve this. Yes, there are plans that it should be possible to get a signed version of the CD too.

Rivenmaster: Are there plans to make a second CD to follow this one and are you working on any new songs currently?

2Boys: Yes we are working on some new songs. So we’ll see.

Rivenmaster: What is in the pipeline in regard to performance and concert scheduling?  What is the farthest you have traveled so far for a gig or stage performance?

2Boys: We have had many concerts in the spring and summer. Concerts and performances are not quite finished yet, because it has to fit in with school too. But it looks good. I think the longest we’ve gone for a concert is about a three hour journey. But we can travel much further and we have.

Rivenmaster: What do all your friends think of your new found fame?  Is going to school a bit tougher for you now being so well known as not just Marcus and Sondre but as 2 Boys?

2Boys: Most friends do not think about it much. When we’re with them, we are only Sondre and Marcus. And it’s very good to just be yourself. We’re the same people we have always been. It’s the same school, although there will always be someone who can say different things. To preserve the true friends is important.

Rivenmaster: Your Dad tells me that you guys get along really well together.  But I’m sure you have your moments of Brotherly Love.  What keeps you guys so well bonded do you think?

2Boys: Oh yes, we are like brothers in general. We can argue about most things too. But because we both have such strong common interests in music and theater, it keeps us get along extra well together. We both think that acting on stage is the best there is.

Rivenmaster: Where do you see yourselves in 10 years from now?  Do you plan to go to college?

2Boys: That is difficult to answer. Hopefully, we will keep doing something in music. Having our own recording studio which allows us to produce and make music for ourselves, and perhaps others, has been so much fun. But who knows. As long as the music is fun, we will certainly continue with it. But education is important. We hope to get into music and drama in high school.

Rivenmaster: Do you have a special dream that you desire to fulfill in relationship to your music career?

2Boys: Our dream is that someday we will perform a concert somewhere in a big country with a very large audience. We would especially like to do a concert in the USA.

For more music articles at theskykid.com  check out our music category .

Visit Rivenmaster’s place for more on 2 boys and other young talents.