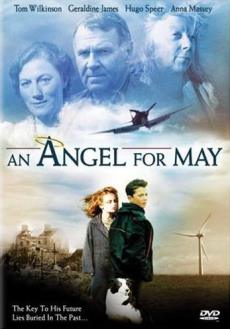 Some  made-for-TV movies deserve to be shown on the big screen.  In the case of the British cinema, this statement is more of a rule than an exception.

An adaptation of the Melvin Burgess book of the same name, the 2002 movie An Angel for May is well worth the consideration of any avid cinema fan. This Coming-of-Age story follows the adventures of Tom (Matthew Beard) who accidently finds himself a way to travel backwards in time. Tom has enough problems in the present – he has asthma and does not exactly excel in sports. (It should be noted that, in many films involving a young character, an asthma inhaler is frequently used to imply greater vulnerability of the youngster – often to be overcome by an excess of bravery and spirit.) Tom spends a lot of time by himself and his parents are separated and about to divorce. The fact that his mother’s boyfriend is the coach of the soccer team he plays for, doesn’t help Tom’s social status with the hyped up peers of his age either. 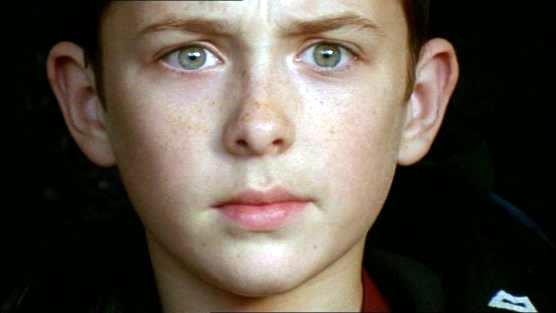 The backward time travel leads Tom into the midst of the 2nd World War. He recognizes his city, but it’s different.  Military machines cross the streets and German bombers fly overhead. His modern day clothes stand out and call him to the attention of people.  Before long, he is framed as a spy by a gang of kids and chased through the streets. He manages to escape, but soon gets into more trouble…

A small girl, May (Charlotte Wakefield), comes to his aid and takes the confused boy to a farm outside the city. They become friends and Tom finds out from the old farmer who takes care of May that the reason for her odd behavior (she sleeps in the dog house outside and prefers to not enter any buildings if that can be avoided), is that she was severely traumatized as a result of a bombing raid in which her relatives were killed and she barely survived buried under the ruins of her house for an entire week.  The newly found friendship seems to help May overcome her trauma and the farmer, who thinks that Tom is another evacuee from the War,  agrees to let him stay at the farm – calling him an angel (referring to his unexpected appearance) – An Angel for May. 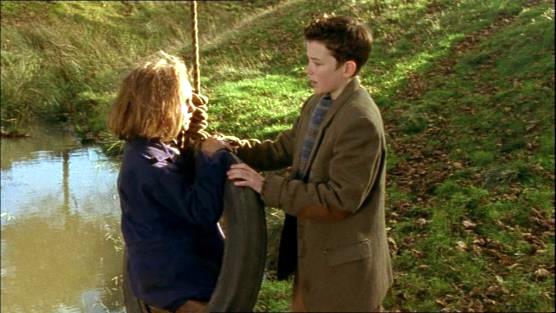 An Angel for May: Tom (Matthew Beard) and May (Charlotte Wakefield)

Despite the troubles at home, Tom longs to return to his own time and eventually manages to achieve that. Yet, once there, he discovers that something horrible happened with the people he met during  his trip into the past and he decides to try to find his way back and do all that is in his power to prevent the harm to his new found friends…

Shot on location in South and West Yorkshire, An Angel for May is an excellent family film that has an education value thanks to the accurate and believable re-creation of war time England. The story is engaging enough to capture your attention as you observe how Tom reacts to the changes in his life, both in the present and in the past, and how the combined knowledge and experience reflects on his choices and personality.  The young actor, Matthew Beard, does a great job in portraying the troubled and confused twelve-year-old Tom. He  brings every emotion to his characterization of Tom and his expressiveness adds great value to the film  – especially through the prism of the Coming-of-Age experiences he undergoes. The other child actor, Charlotte Wakefield, was equally convincing in the role of May.

While An Angel for May may not be a big blockbuster, it’s nice enough to guarantee a pleasant afternoon or evening for the entire family. It’s an educational, emotional and inspirational movie – well worth your time.