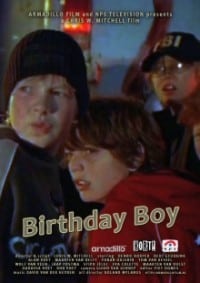 Some films can bore you to death with predictable narratives and slow paced action. Yet others manage to keep you in suspense, guessing what will happen next. The 2006 Dutch short film Birthday Boy, directed by Chris W. Mitchell, is doubtlessly of the latter kind.

The film appears to be shot utilizing hand-held cameras to emulate the home video recording of a birthday party for 11-year-old Sjoerd. At first, it appears that this is the typical pre-teen birthday featuring video games and treasure hunts, but soon the games the party guests play will put them into a hazardous situation.

Initially it was the film description on ShortFilmCentral.com that piqued my curiosity. It read: “It’s Sjoerd’s 11th birthday party and he’s got everything a modern boy could wish for. Now he just has to make sure he stays alive to enjoy it.“

With such a teaser, one could assume the film will feature action and surprising twists, but I didn’t as many surprises in the film’s scant seven minutes of screen time.

Birthday Boy features an original situation-driven narrative that really keeps viewers on the edge of their seats. Recommended!

You can watch the film, below, courtesy of  producer André Bos who shared it on his Vimeo account: