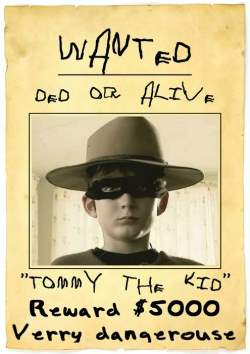 The wonderfully shot short film Tommy the Kid tells the story of a young boy living in a small town in suburban Australia. He dresses up as a cowboy and beware  — he is “Verry Dangerouse”.  His bike plays the role of his faithful horse until it gets stolen by the greedy owner of the second-hand goods store in the same town.  The bike is repainted but, as every good cowboy knows his horse, Tommy is able to recognize his bike – even with its new color. Yet the store owner won’t return the bike, claiming that he recently bought it at an auction. What is Tommy to do?  How is he to reclaim his bike?  What would a real cowboy do?

Tommy’s imagination and his adventures, as told by the Australian director Stuart Clegg, makes the reality and fantasy world blend into one truly engaging story. Although there are only few lines of dialogue in the film, its story is told via the excellent acting (especially of the young Isaac Harrison in the role of Tommy) and cinematic means – namely appropriate cinematography, good costumes, rugged scenery and wonderful landscape shots.  And, yes,  the classical Western sunset is also present.

The references to the Western genre and the lonely cowboy, combined with the suitably haunting soundtrack,  effectively translate the Western feel into this short contemporary story. You are likely to see things through the eyes of the imaginative Tommy and feel as if the action took place in some remote place in the old American West, rather than an Australian town of the present.

Tommy the Kid is a wonderful short film that I don’t hesitate to recommend highly to the readers of theSkyKid.com.  If you feel like watching a similarly themed full feature film, check out the Irish Mickybo and Me .

Tommy the Kid at IMBD