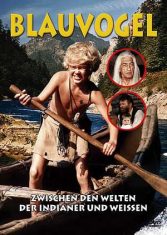 Blauvogel was in my collection from quite some time – but I have not seen it – mainly because I was not sure if I could follow along without subtitles. The movie is German – but I found dubbed Russian version which made the viewing easier ( I am currently taking German I – but it would take time until I can watch and understand movies in it). Despite the worries I had the movie turned out to be an easy one to watch .

While I am a big fan of stories about American Indians – Blauvogel did disappointed me a bit. It is released in 1979 and may be this is one of the reasons for which the filming was not that good, the scenes convincing enough or even the acting believable ( well Robin Jaeger did well )- but I have seen other movies released near that year which turned better.

The story develops around 1850 when an English farmer settles in America with his family. His oldest son George ( 10 y.o) is kidnapped by the Indians and later on accepted in their tribe under the name Blue Bird. He faces many challenges – coming of age in this new environment . And when he becomes a man and the circumstances make him return to his English family he has to find himself once again – will he succeed?
The movie was not perfect , but I liked it never the less. Somehow it just felt like I am out there in the field playing the role of George ( I did that many times – being an Indian was one of my favorite fantasies ) . The coming of age element is considerable – as George develops a lot as a character – even through right after his childhood , we see him as 20 years old man.
I have read other review stating that there was an excessive amount of violence in Blauvogel – but I did not found this to be true.
http://youtu.be/8boO_tUn0WY
IMDB page (link)
Facebook
Twitter
WhatsApp