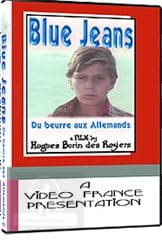 Blue Jeans is quite a delightful film. It had gained a good reputation since 1977 when it was produced, even if since that year several more films having the same name were released which often cause confusion in people looking to find the French masterpiece  directed by Hugues Burin des Roziers. A charming coming of age plot which has the usual for this genre focusing on first love, youthful confusion and peer relationships. We observe a familiar tale in which a group of French boys are sent to England to improve their English and discover the world …and discover the world they do as soon as their parents are out of sight. They start making plans for how to impress the English girls and most have already thought of a specific strategy. Amongst them is the film’s protagonist – the eleven year old Julian(Gilles Budin).

Soon after the group arrives in England, it becomes clear that having adventures, hanging out at the local arcade and of course checking out the British girls are what the boys understand by the term “language vacation”.  Julian is lucky to spot a beautiful girl at the arcades – Janet — and they spend some wonderful times together  – laughing, talking and holding hands while taking night walks at the beach. The whole romance of first love – you know the one you can’t forget (nor can I …). Yet, things are about to change for Julian (in my case it was a letter from the girl I loved, in which she told me  that others may spread rumors of her being with other boys while I was away at the seashore, but that they were all lies.  I found that letter odd, especially since I later found out the rumors were true). And in the case of Julian – he just discovers one day that the girl whom he admired now has another boyfriend who, to makes things worse, is also French, older and seems to be indifferent that the girl with him was the girlfriend of Julian before.

It’s interesting to observe the reaction of Julian  – seeing that his girlfriend dumped him for an older boy.  He decides to see what that boy has that he doesn’t.  Jean-Pierre ( the older boy) doesn’t seem to mind Julian hanging around with him. At one point they exchange their pants as Julian thinks that it’s the Blue Jeans of Jean-Pierre that gives him such an aura with girls. This act, however, is misinterpreted by Julian’s friend, who starts teasing him about the time he spends with Jean-Pierre, saying he has become “a little blonde fairy-boy” for hanging out with Jean-Pierre, even exchanging their pants.  This is the part of the film that brought back some memories for me as I also once exchanged my t-shirt with one of the boys I played soccer with.  But that was more like a friendship thing than anything else and thankfully in my case the inappropriate remarks did not have much chance to spread. Yet for Julian, things become quite difficult – he becomes sad and confused, and the other boys in the summer camp make sure that  he is not left alone.

The film is good and I would re

commend you see it. I am not sure if it can be compared with titles such as You Are Not Alone, and  This Special Friendship – even if one may sense some overtones existing in the three films. What really matters to me is that the coming of age story is well told and developed throughout the film. The soundtrack is quite good (French chansons with coming of age lyrics)  and good acting  by the  majority of the film’s cast.

This review would not have been possible without the valuable support of SCVMC.net who provided the DVD for it.