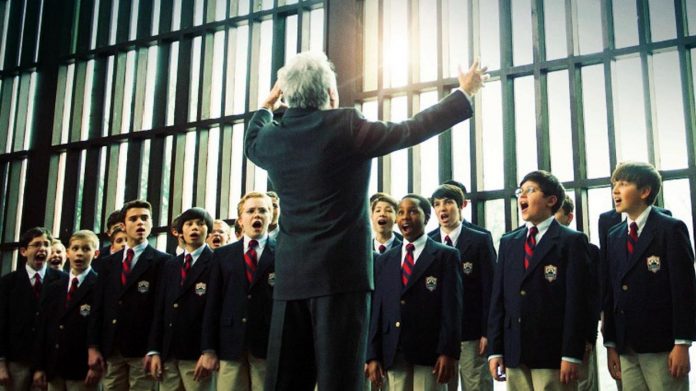 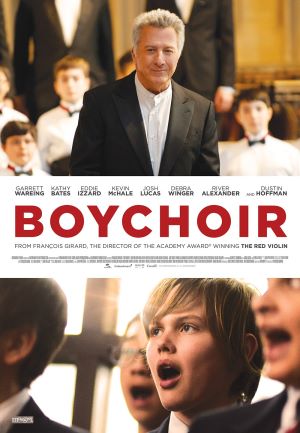 Before even starting to review this 2014 film, I should disclose two things that are likely to have influenced my take on it: 1) my personal affinity towards treble music acquired by attending boys’ choir concerts, collecting musical albums and by reading books such as Martin Ashley’s How High Should Boys Sing? (among others) and 2) the hype surrounding the film, which resulted in my anticipation of a Coming-of-Age masterpiece.

The film’s lead protagonist is Stet (Garrett Wareing), an 11-year-old whose harsh life leaves a mark on his youthful personality — making him unhappy and rebellious. He’s the epitome of a troubled kid: Stet has issues at school and at home primarily caused by his mother’s alcohol addiction.

The principal of the school he attends notices that, despite his unruly character, the boy displays signs of musical aptitude and has a beautiful treble voice. In an attempt to help him, the principal arranges a singing audition with the National Boy Choir – which doesn’t go as planned. Yet, when a tragedy takes the life of his mother, his distant father (who has another family) sends Stet to the National Boy Choir academy. Fitting in, in a completely new atmosphere, becomes a real struggle for the boy …

Nobody likes predictable narratives, and even less so if that predictability is the prime result of clichéd scenes and stereotypical characters. Unfortunately, the biggest flaw of François Girard‘s film is that it rehashes scenes and happenings from similarly themed movies such as the 1962 Disney production Almost Angels and the 2004 French movie The Chorus (original title: Les Choristes). Even if one has never heard of the films I mentioned (and if that’s the case I highly recommend that you treat yourself and watch them), the crowd-pleasing, neatly arranged, manipulative manner in which the story in Boychoir is told is a bit insulting. And I believe that would hold true even for people who watch films purely for entertainment reasons.

Despite the storytelling shortcomings and the slight imperfections in the acting performance of Garrett Wareing in the lead role (which I am willing to attribute to incompetent directing), Boychoir is likely to be appreciated by fans of the Coming-of-Age genre and people who appreciate the purity and the supernatural beauty of the treble voice. The talent and the angelic voices of the real-life American Boychoir is what essentially charms the viewer and provides the viewing/listening pleasure one looks forward to in the cinema.

My high expectations for the film were not met as I was left with the impression of a wasted potential – a missing indigent of the cinematic recipe which includes high profile names (Dustin Hoffman), angelic music and …not much else. Yes, like most Coming-of-Age titles, the film does teach life lessons and aims to inspire viewers of all ages. But the plot flaws and weak character development prevents total success from happening.

Comparing Boychoir with Les Choristes, which manages to achieve an inspirational and touching blend of music, story and characters with which the viewer can get deeply involved, one fully realizes the significance of missed potential in Boychoir.

PS. Afterward, I found myself singing the songs I heard in the film, so it must have inspired me at least a little bit. But treble music would do that.

Do see it – the score makes viewing the film worthwhile.

Facebook
Twitter
WhatsApp
Boychoir will be appreciated by fans of the Coming-of-Age genre and people who appreciate the purity and the supernatural beauty of the treble voice. Boychoir (2014)
TheSKyKid.comYoung talent in the movies and the arts