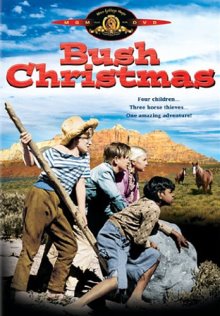 For a film with a title like Bush Christmas, you won’t find many “Christmassy” motifs in this 1947 movie, which was directed by Ralph Smart. This should not come as a surprise, as in Australia where the action is set, “…Christmas comes in the middle of the summer…”. Yet, if you choose to see the film yourself or play it for a child spectator, neither of you will be disappointed.

The Christmas cheer is replaced by a bundle of adventures. Five kids set out on a quest to recover their father’s favorite horse, stolen by passing horse thieves. The Australian (British co-production) feels a lot like a Western – one in which children are the main protagonists. It’s filled with horse riding, trail tracking and trap setting and it’s impossible not to feel the excitement and the dangers that the kids get themselves into while lost in the wilderness, chasing the debauched horse thieves.

The film is lighthearted and I suspect some of the later Christmas classics, such as the Home Alone movies, have borrowed something from it regarding the way bad people are portrayed and the creative manner in which a young child may face them…and survive!

Some reviewers mention that the way the Aboriginal boy is portrayed in the film is racist. I highly disagree with such opinions. Racism in the film is non-existent – unless one is actively looking for the smallest thing to focus on and complain about. The young Aboriginal’s skills of survival in the wilderness help his well-mannered (if a bit spoiled) Caucasian friends. Continuing the parallel with the Western genre:  if one strongly believes that the Native Americans are always portrayed in a racist manner, then perhaps he/she will be more likely to accuse the film makers behind Bush Christmas of the same thing.

Bush Christmas is very well cast and I adored the prominent British accents of the young actors. Most notably I enjoyed the performance of Morris Unicomb as John Thompson who, while overacting at times, made his character appear full of innocence, mischief and virtues at the same time.

The storytelling features a narrator describing the settings and filling in details, which gives the film the feel of an adventure novel.  Such a style of narration is rarely seen in today’s films. But, in a way, I find it extremely appropriate — especially when it’s used in a family-oriented picture. Not surprisingly, the film is shot in black and white. Yet, while the cinematography is not particularly spectacular (with the exception of the striking use of silhouettes),   there are no flaws to be found.

Bush Christmas enjoyed a lot of attention and praise when it was originally released and, more than sixty years later, the film is still fully capable of entertaining and capturing the imagination of its viewers. In 1983, the film was re-made starring the young (and then unknown) Nicole Kidman but, as is frequently the case with re-makes, you will be better off sticking with the original release.

Clip from the movie: