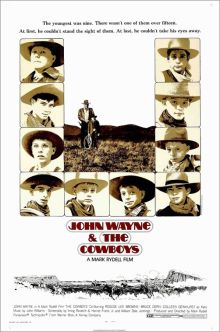 “I am a man and you are boys. Not common, not by a damn sight. Nothing but cowboys, just as the word says!”

When we published the review of Savatore Samperi’s film Nenè here on the site, I could not help but notice that most classic Coming-of-Age films here were released in Italy. Surely, I thought, there must exist American produced films that focus on youth that were released in the 70s or 80s. This uncertainty resulted in a discussion with the site’s editor, during which I added several American film titles for me to investigate. One of them was a 1972 film starring John Wayne: The Cowboys.  A western!

In The Cowboys, John Wayne plays the role of Wil Andersen who is a veteran rancher who needs hands for his yearly cattle drive — a tough drive running through “the meanest country in the West” for more than four hundred miles. It seems that the men who normally work for Mr. Andersen have all left to seek their fortunes in the famed California Gold Rush.

Left without any options, and with a bundle of bills to pay, the livestock rancher is forced to consider hiring young boys – aged nine to seventeen – straight from the town’s school. Knowing that  “cattle driving is no Sunday school picnic”, Mr. Andersen is skeptical —  even when the boys show up early one morning to put in for the job.  He puts the boys to a test and, when he witness their determination and horse riding skills, he decides to take them on.

For the rest of the film, this young group learns to become efficient cattle drivers, led by Mr. Andersen and Jebediah Nightlinger (Roscoe Lee Brown) – a black man hired as the drive’s cook. No other adults are present on the ride, though some convicts have been rejected by the rancher who doubts their reliability and good intentions.  Unfortunately, this will not be  the last time Anderson will hear from those convicts …

For the boys, the cattle drive is a unique chance to prove themselves and toughen up.  They might be inexperienced and innocent (even if the old cook will have none of this.  “Innocence is wasted on me”, he says. “I don’t believe in it”).  Rebellious, mischievous and curious (like boys their age always are), but under the strict guidance of the old rancher, the boys are ready to turn into men of good morals, with responsibilities and dignity.

Enough time is devoted to the character development of the boys, so that the viewer learns each of their unique personalities. One is encouraged (along with the boys) to learn the values of service, duty and discipline. Yet at no time does the film feel “preachy”. The life lessons learned are tied in with the story. The journey provides a lot of opportunities for the boys to come of age – hard drinks, a madam and her ladies, and an encounter with rustlers are just some of the challenges faced by the group.  If you think about it, those experiences are not much different than some that kids face nowadays, despite the differences of time and settings. In fact, I would like to use a quote from the introduction of the book by  Murray Pomerance and Frances Gateward: Where the Boys Are. Cinemas of Masculinity and Youth, which perfectly describes the common way in which youth are portrayed in Westerns (including this one):

“All of those cowboys are boisterous, energetic, awkward though well-intentioned, uncivilized yet magnetic, pre-sexual or at least sexually unknown, and beautiful to look at”.

The narrative of The Cowboys is pretty straight forward and apparently follows a five part dramatic structure: 1) an exposition in which the audience is introduced to the characters and the challenges lying ahead, 2) a rising action in which an older Hispanic boy is shunned for being unable to fit in due to his fiery temper and the convicts are turned down for lying,  3) a climax, which occurs with the first challenges the youth face on their ride, 4) a falling action – when a boy is captured by the villains who intend to steal the cattle, 5) and a denouement- a resolution I won’t detail so as not to spoil the film. The story does provides several surprising plot twists – especially one having to do with John Wayne’s character.

All this is accomplished in a bit more than 130 minutes, a lengthy running time for any film, but perfectly justified for The Cowboys. This is the very first film that featured an intermission after the first part and, when it did,  such a moment was chosen during which I felt a longing to experience that moment in a big screen theater, using that time to discuss with others in the audience what I had just seen and also speculating as to what may happen next.

As I admitted when reviewing The Winds of Autumn, the only other Western Coming-of-Age film I have seen, I haven’t seen many films of the genre (but I have read a lot of books about cowboys as a kid). While the two films share some common characteristics,  The Cowboys focuses more on a collective rite–of–passage while, in The Winds of Authum, the focus is more on the individual experiences and tribulations.

I was surprised by the excellent acting, riding and lasso skills by the young actors. They were a joy to watch and I have no doubts that, had I seen this film as kid, as soon as the final credits had rolled one would have seen me trying to lasso some chicken or a cat out in my backyard. And, while many will appreciate the beautiful musical score (featuring subtle guitar pieces and classical western enthusiastic “Let’s do it” vibes), the saturated colors and an abundance of close up and reaction shots of the boys, John Wayne’s character and even the villains (so one can really see how a face can show one’s personality) –- it is the adventurous spirit and cowboy skills of the young cast that will really inspire young viewers.

John Wayne is an icon of the Western genre – and while The Cowboys is the first John Wayne film that I’ve personally viewed, I can understand why his acting skills are praised so much.  He embodies his character with strong individuality and an impressive memorable presence.

The Cowboys may not be the most violent or suspenseful Western, but a Western it is and, from what I have seen and read, I see no reason why fans of this genre would not appreciate it. As a Coming-of-Age film, it excels with an intriguing story filled with humor and challenges. I don’t hesitate to recommend it highly to you, while my own wish is to find other similarly themed Western films to watch and review.

The film’s tagline is a perfect closure for this review: