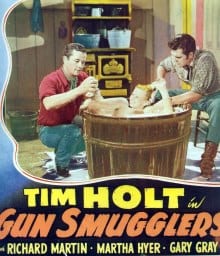 Westerns – there are not many films of this genre with young protagonists in the lead roles. Granted, in a genre whose characters are predominantly tough men, for a young protagonist to be successful, it takes a distinctive script, good directing and talented young actors.

Frank McDonald’s 1948 film Gun Smugglers fulfills all of the above requirements. Starring child star Gary Gray (best known for his role as Tommy Blake in the original Lassie in 1951) – the film tells the story of Danny, a young boy who helps his outlaw brother and his friends to steal a cache of Gatling guns belonging to the US army.

Gary Gray is not the only star actor in the film. Tim Holt and Richard (Chito) Martin play the roles of two cowboys that intervene and manage to capture Steve Reeves (played by Douglas Fowley), the leader of the outlaws, and his younger brother Danny. Steve refuses to tell where his gang hid the stolen weapons – so the two cowboys decide to befriend Danny and find out from him the whereabouts of the stolen firearms. But Danny is no snitch….

Gun Smugglers has everything you could expect from a good Western – exciting fist fights, shootouts, horse-riding (here Gary’s skills really shine and no wonder since he got the role in the film largely because of his riding skills1).  And, of course, no good Western is complete without a beautiful maiden (Martha Hyer). Granted, the killings in the film are a bit over acted – almost theatrical – but that is not atypical for cinema from that time period.

The performance of Gary Gary in the role of the mischievous tyke, who uses his cute and innocent appearance to his advantage, is undoubtedly on par (if not better than) the acting of the adult cast. Gary practically grew up in front of the camera, and by the time he was chosen for the lead role in Gun Smugglers he already had an impressive film resume with a ton of experience.

If you love Westerns, or are looking for one that young audiences would enjoy as much as you will, Gun Smugglers is a good choice. The script put some emphasis on moral values, as the two cowboys try to change Gary’s way of thinking in hopes of saving him from a life of crime. Personally, I cheered more for the mischievous side of Danny, hoping that he would keep on living as a young outlaw (yet that would have made this an entirely different film).

1.Growing Up on the Set: Interviews with 39 Former Child Actors of Classic Film and Television by Tom Goldrup, Jim Goldrup and Diana Serra Cary (May 6, 2002)