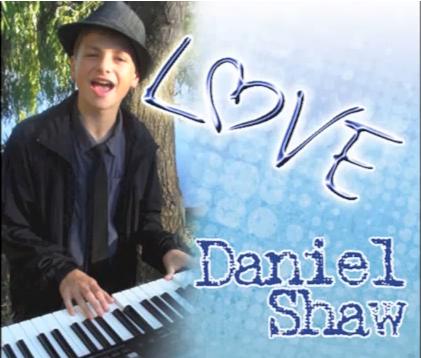 Daniel Shaw from Australia is one of the most amazing young artists that I have ever written about or been afforded the privilege to get to know through my own promotional web site.

When I first discovered Daniel through his YouTube Site, I was immediately drawn to his music. Unlike so many youngsters who are doing covers, Daniel was doing his own music complete with beats, instruments, and original lyrics written exclusively by him. That’s saying a lot for someone who has only just entered his teens.

While I have featured Daniel twice on my own site and placed his music and videos in sidebars, I was especially delighted when I was asked to review his debut CD entitled “Love” here at The Skykid.com.

Daniel’s innocent sounding vocals, along with his unique tone quality exhibited in every song, is a real listening pleasure.

While everyone has different tastes or favorite genres of music, Daniel has a way of stretching across generational gaps. If his first CD is any hint of what we can expect in the future from this young musician/songwriter/vocalist, we are in for a very pleasurable future collecting Daniel’s music.

I asked Daniel what inspired him to write each song that I am reviewing. I have included his inspiration at the end of each track review!

No More – This first track is a real bold opener for his CD. A slow R&B sound with lyrics that are older than Daniel’s experiences, yet written and performed like he truly understood heartbreak and what happens to someone hooked on the love of another and not able to shake the powerful influence of that attraction regardless of the consequences. Words and Music by Daniel Shaw and Lina Shaw – Producer Brendan Marolla, Bounce Studios **Lead Vocals: Daniel Shaw

Inspiration: “I wanted to write a song like Bruno Mars’s Grenade song.”

Love – It’s easy to see why this song was chosen as the cover song. While it’s hard to pick a favorite from Daniel’s ever increasing volume of originals, this was the song that caused me to really take notice of Daniel’s ability to express himself through his music. Love is an R&B song that has a simple but wonderful message exclaiming that True Love is what will make a difference in the world. “More than Money or Fame you can never be the same without Love!” Words and Music by Daniel Shaw and Lina Shaw – Producer Brendan Marolla, Bounce Studios **Lead Vocals: Daniel Shaw Backing Vox: Daniel Shaw, Brendan Marollo

Inspiration: “Seeing homeless people in the street really inspired me to write this song. It also makes for a great contemporary holiday season song.”

Personal Space – A nice R&B mix with a message about holding on to your dreams and goals no matter what other people may say. Daniels intertwines a very unique tune along with some special keyboarding and wow sounds. Words and Music by Daniel Shaw – Producer Brendan Marolla, Bounce Studios

Inspiration: “This song was inspired by the lack of faith some teachers and other had in me making it as a world famous entertainer like Billy Joel.”

Lean On Me – Daniel picks up the speed with this Dance/Pop Party song. I really like the way this was produced, using some special enhancements both to the vocals and instrumentation. More dance than lyrical statement, it still conveys the simple message of dedication you have to always be there for that special someone in your life. Words and Music by Daniel Shaw and John Shaw – Producer Brendan Marolla, Bounce Studios

Inspiration: “Like Bruno Mars’s “Just the Way You Are”. This song is also a great party song.”

Heaven Forbid – Daniel keeps the feel good sound going with this nice R&B mix that has a good combination of both tune and lyrics. This is another great teen love song about finding that special person to share your life with. Then, once you find them, not to let them go. Words and Music by Daniel Shaw and Lina Shaw – Producer Brendan Marolla, Bounce Studios

Inspiration: “I wanted a song for performances and concerts that could be used to serenade a fan in the audience.”

Who Am I – Is a catchy tune with an R&B/Latin/Hip Hop sound that encourages us to just be happy with who we are. – All of us are unique, and Daniel wants us to know that we are all somebody’s Mother, Father, Brother, Sister or Friend. I liked this song as it’s an easy listening song with a very big message. Words and Music by Daniel Shaw – Producer Brendan Marolla, Bounce Studios

Inspiration: “As a kid, we question our identity; this is the inspiration of this song. A lot of people, regardless, question their identity and purpose in life; this song is for them.”

Avatar – When I first saw the title of this song I was intrigued, as I had just seen the movie by the same name. I thought how creative of Daniel to write a song using his imagination about being an Avatar. The music has a slow dance beat and is an easy listing tune. Daniel takes us on a magical journey in this song with lyrics that are fun and creative. Words and Music by Daniel Shaw and John Shaw – Producer Brendan Marolla, Bounce Studios

Hello – Features Daniel’s excellent keyboarding skills, opening with a run that is repeated throughout the song. As this R&B number progresses, so does the intensity of this musical masterpiece that attempts to cry out with a message of despair, asking for someone to take notice of your simple existence! Words and Music by Daniel Shaw – Producer Brendan Marolla, Bounce Studios

Inspiration: “Being ignored while busking and not being taken seriously by teachers and others.”

I Will Remember You – Daniel’s pure, innocent and beautiful vocal brings us a song about losing someone close to us. This song, like his other slower contemporary Ballads, is more message than get up and dance. Daniel proves once again that he has a special knack for relaying a message in a song that embeds in our memory long after the music stops. Words and Music by Daniel Shaw, Lina Shaw and John Shaw – Producer Brendan Marolla, Bounce Studios

Inspiration: “My mother experienced a miscarriage at 14 weeks; we all felt it as a family.”

Hey Little Brother – This song, like his other slow Ballads, brings you to a heightened place of tranquility. A love song of sorts expressing the love and faithfulness that is especially unique to brotherhood. Knowing that Daniel actually comes from a rather large family of siblings, it was no surprise to me that he would be inspirited to write this uplifting song. Words and Music by Daniel Shaw and Lina Shaw – Producer Brendan Marolla, Bounce Studios; Nathan Warrick Kane Audio, Melbourne, Australia

Inspiration: “This is one of my earlier songs dedicated to my little brother Rafael.” 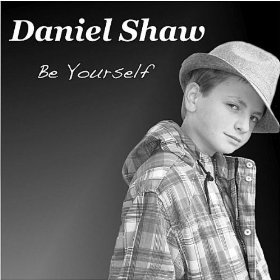 Be Yourself – This is another song which is unique to the Daniel Shaw sound. I especially enjoy the higher notes, which are almost angelic in this slow, moody but beautiful tune. Again, Daniel’s message is larger than life, inspiring us to be true to ourselves in spite of outside pressures that are always prevalent in our lives. Words and Music by Daniel Shaw Producer Brendan Marolla, Bounce Studios; Nathan Warrick Kane Audio, Melbourne, Australia

Inspiration: “Sometimes we feel pressure to conform and do things we don’t want to do. This song encourages me to be myself in spite of those pressures.”

Also included on this CD are extended versions of the songs Love and Avatar. These remixes showcase additional beats and computer generated enhancements that add to the musical pleasure of these two great originals by Daniel.

To purchase Daniel’s Debut CD, please visit iTunes by using this link or by clicking on the album cover at the beginning of this article.  I know you will not be disappointed and it will help support Daniel as he makes his way to international fame.

You can also read my latest article all about Daniel and his International Tour this past summer. Read about his visit to the US, Canada, and Europe!