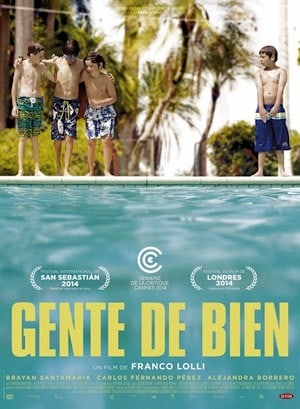 Gente de bien (English: Well To Do People) is a 2014 Coming-of-Age drama focusing on social inequalities. It’s directed by Franco Lolli. While the action takes place in Colombia, the story is universal and could have happened anywhere in the world (as confirmed by my own experience).

Unlike other social dramas, Gente de bien does not intend to pass judgement by portraying the well-off people negatively or vice versa. The filmmakers have decided to show life as it is -thus opting for accuracy instead of pre-set tear-jerking scenes.  The central character of the film is 10-year-old Eric (Brayan Santamarià), who gets sent to live with his hard-working dad Gabriel (Carlos Fernando Pérez). The short-term handyman projects Gabriel undertakes barely provide enough money for the rent. Yet, as a loving parent, he tries his best to make Eric feel welcomed and happy.

Gabriel’s latest client, a well-to-do university educator by the name of Maria Isabel (Alejandra Borrero), takes to heart the father’s problems and invites him and Eric to spend the summer vacation with her and her kids at her family’s luxurious country villa. Gabriel is reluctant to accept. But, facing eviction from the flat he rents in a boring house, and being offered a job placement in the villa while the vacation lasts, he goes along with the suggestion of his employer.

Unfortunately the ever present conflict between pride and prejudice plays its role as the different social atmosphere makes Gabriel begin to feel inadequate. Meanwhile, Eric is still too young to note his father’s feelings, but faces his own challenges in the universal struggle for acceptance and self-assurance.

As the son of hard-working parents living as immigrants in a foreign country, I was able to associate with Eric’s struggles (despite our difference in age), which speaks volumes about the accuracy of the narrative and the effectiveness in how it is related in the film.  How well I identified with Eric’s character in the film is also a testament to young Brayan Santamariathe’s natural talent in front of the camera..

The film’s drama and conflicts are the total opposite of those portrayed in Gennaro Nunziante‘s 2013 movie Sole a catinelle (Sun in Buckets). Although both films feature a “working-class” father and son who find themselves in an upper social class,  the latter aims to entertain the viewer with funny scenes showing how crazy life can be, while Gente de bien harshly portrays the class distinction present despite the good intentions and the lost innocence of young boy — a victim of that same inequality.

I felt slightly disturbed by the fact that the actors cast in the roles of the well-to-do characters are, on average, somewhat more charismatic (both kids and adults). But then as takes on visual appearances can be subjective for each individual viewer, this is not a factor that strongly affected my general positive impression of the accuracy and realism of the story being told.

Some viewers may dislike the slow dramatic buildup of the story, but it is necessary to grasp the complexity behind the misleadingly simple happenings. The difference in social standing is portrayed in an effective manner, second only to that of Ursula Meier in her 2012 film L’enfant d’en haut (Sister), which offers surprising twists in addition to an emotionally charged and complex narrative. 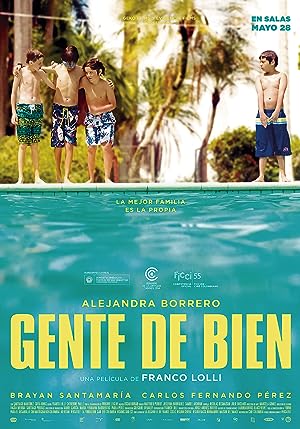 Interview with the film’s director available at directorsnotes.com