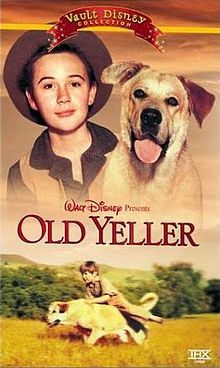 While looking for good Coming-of-Age novels to read, Fred Gipson‘s book Old Yeller was recommended. I read it over the course of two days – and although it did not turn to be as sappy as I was warned it may be – it inspired me to seek out the 1957 Disney film based on the novel. Having seen it, I decided to review the movie instead of the book as, for some reason, I found it much more moving than the book – something of a rare occurrence in my experience. Additionally, while the film adaptation generally followed the story related in the book closely, unlike the novel, it did not include the spoilers that give away the ending.

The story of Old Yeller is set in 1869 on a farm in a remote settlement in Texas. A family of four is making a living in the harsh conditions of the American frontier thanks to a lot of hard work. When Jim Coates (Fess Parker) has to leave his family to go on a cattle drive that could take months, his 14-year-old son Travis (Tommy Kirk) takes care of the family in his absence. One day, a stray yellow dog evokes havoc on the farm and later steals some meat that had been hung up to dry. Travis is outraged, but his younger brother Arliss (Kevin Corcoran) falls in love with the mischievous dog and claims it over his brother’s protests. The dog, however, turns out to be a great pal and protector for the family and soon proves his loyalty by saving the lives of both brothers on different occasions. 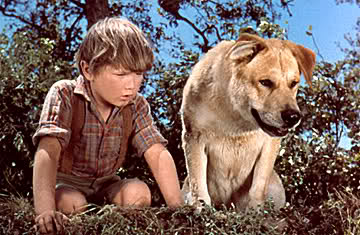 Essentially Old Yeller is a classic example of a Disney family-oriented animal adventure story, with the potential to appeal to young and adult audiences alike. While more Coming-of-Age value lies within the pages of the book (thanks to its first-person narrative told from Travis’s viewpoint), it’s not absent from the film — especially in the final scenes that feature a touching conversation between father and son.

The best actors in the movie are undoubtedly the animals led by a dog as the title character, making the film a real treat for young viewers. The story is fast-paced and exciting enough to hold the attention of its audiences. If I have any complaint, it would be directed at the musical score, which features way too many non-diegetic sounds intended to boost the dramatic effect of the film’s events and scenes. If you enjoy the movie, you may be singing its theme song as the final credits roll, but if you don’t, it’s likely to be a bit of an annoyance due to its somewhat hackneyed sound. On the positive side, the dialogue between the characters is charming, thanks to their old-fashioned accents.

Spiritual relationships and the reliance between boy and dog is one of the prominent motifs of the story. Still, the author also empathizes with the journey towards manhood of the teenaged Travis, who accepts adult responsibilities and learns to deal with the destitution of the hard frontier life.