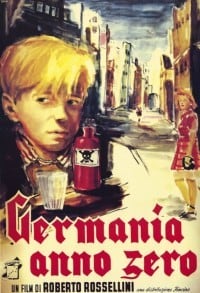 Portraying war and its impact on people does not necessarily mean that the narrative needs to involve military actions. Too frequently filmmakers opt to focus on the psychological effects of war by featuring a young child as the lead protagonist of their works. My Name is Ivan, Come and See, Savrseni Krug, and The Other Bank are just a few of the war themed films with a child in the lead role. The narratives of these war films can be categorized as Coming-of-Age. They noticeably focus on the psychological alterations and developments that youth experience as the result of hardships and the daily struggle to comprehend a world in distress that surrounds them.

Similarly themed to those films list above, Roberto Rossellini‘s 1948 film Germany Year Zero, set in the ruins of the riddled Berlin, focuses on the fate of 12-year-old Edmund (played by Edmund Moeschke)  and his family. With a sick father, a brother who refuses to register with the authorities for fear of being made accountable for his services in the military and a sister who has to accompany soldiers of the Allied forces to make ends meet, Edmund must find a way to help bring food to the table. He is willing to work as hard as the adults, but no one is willing to hire a boy his age for manual labor.  At twelve, Edmond’s soul is innocent and pure, yet his daily time spent on the streets will inevitably change that.

While wandering those streets, Edmund encounters a former teacher of his who convinces the little boy that he could make some money by selling Nazi propaganda on the black market. The teacher is likely a pervert (especially in the eyes of modern movie goers), but in addition to that he seems to control a band of young criminals. Undoubtedly, when you watch the film, you will admire the young Edmund and his determination to help his family. You will hope and pray that he makes the right choices and trusts people worth trusting. And when you witness the young Edmund committing a shocking act, you will refuse to accept that he is capable of it.

The whole film is grim and dramatic and is shot on location in the real ruins of post-war Berlin. These settings play a major role in shaping the overall impact of this tragic story. In a way, the ruins that surround the characters in the film serve as allegory to their hopelessness and despair.

The film’s cinematographer, Robert Juillard, makes an excellent use of lighting and shadows to enhance the environment and to emphasize the emotions of the film’s protagonists. Four years after shooting Germany Year Zero,  he was to work on another war- themed Coming-of-Age film: René Clément’s Forbidden Games (1952). Like in Elem Klimov’s Come and See, the viewer witnesses the changes wrought on an innocent young protagonist by observing his changing appearance – from carefree youngster to an older, tougher and distressed persona. The ending is unexpected, but perhaps logical as, in such cases, there are never easy solutions.

The film is likely to live a bitter taste in your mouth when the final credits roll, but it’s worth seeing if only to attain an understanding of the impact an environment and situation can have on the developing persona of a young child. Recommended!