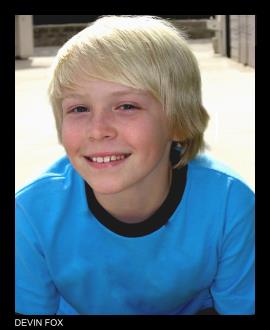 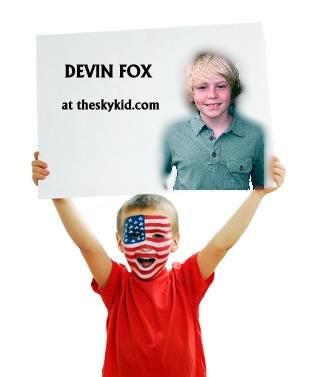 The world is full of great talents and, thanks to the Internet, we are now able to discover them much more easily than in years past. Robinzion in Russia, Sam Verlinden in New Zealand, Arden Rymer in Canada, Alex Georgiev in Bulgaria,Yatharth Ratnum Rastogi in India – it’s quite a long list and I have only mentioned a few.  One of the missions of theskykid.com is to support and promote young talent and today I would like to introduce a new talent — Devin Fox.

American Devin Fox was born in Ohio on September 12, 1997. That makes him 12 years old and he is the youngest of seven children.

Here’s just a sample of his musical talent:

Use Somebody – Kings of Leon Cover

Devin found his voice about two years ago but has only been serious about singing for about a year. He has taken voice lessons for a year and a half and has just started piano lessons three months ago.

Devin has competed in a few local talent competitions and won prizes such as recording time in a studio and a spot to perform at the Michigan State Fair. In addition to singing, Devin loves to act and do musical theater. His favorite roles so far are Grandpa Joe in Willie Wonka and Rooster Hannigan in Annie Jr.  Devin also likes to draw and has been enrolled in an art class for about a year. He also likes movie editing and photography.

With his movie editing programs, Devin has made several sims videos :

For more videos made by Devin visit his Sims channel

One of Devin’s sims videos received an offer to partner with Google, an indication of the good quality of his work in that area.

Devin was kind enough to consent to answer a few questions for theskykid.com:

TheSkyKid.com: When and how did you first discover you could sing?

Devin Fox : Three years ago my sister asked me to sing an audition song that she was having trouble with and when I sang it everyone really liked it.  But I’ve only been serious about singing for about a year.

TheSkyKid.com :If you couldn’t be a singer, what would like to do with your life?

Devin Fox : If I couldn’t be a singer I would like to be an actor.

TheSkyKid.com:In the description of  a YouTube video of yours, it was mentioned that you sing in a choir.  I really appreciate choir music myself. Is there any particular choir you follow – Libera,WSK…etc ?

Devin Fox : No. But at my school choir is the only vocal music offered.

TheSkyKid.com: What role does music play in your everyday life and what does it mean to you?

Devin Fox : Without music I don’t know what I would do because it is such a part of my life.

TheSkyKid.com: What else do you enjoy besides singing?

Devin Fox : I like to draw, act, I make sims videos with my editing programs and I like photography and using photoshop.

TheSkyKid.com: What is your dream goal?

TheSkyKid.com: Do you get a lot of support from your large family?

Devin Fox : Yes. I do from most of them.

TheSkyKid.com : If you had the chance to perform with anyone in the world who would it be?

TheSkyKid.com: Do you get nervous on stage?

Devin Fox : I get nervous before I go on, but once I walk on the stage I’m fine.

TheSkyKid.com: Do you keep in touch with any other young star like you – Jordan , Arden…etc ?

TheSkyKid.com: How do you choose the songs you sing?

Devin Fox : My family and friends make suggestions and from the radio or billboard top 100.

As if Devin’s musical talents weren’t enough, once you get to know him, it becomes obvious he has some other talent genes as well.  He loves photography and he has a real gift for art.  Here is a line drawing that Devin’s mom, Lorrie, sent me.  I’m including it in this post with his/her permission.  There is no doubt that should he ever decide down the road not to follow a career in music, there is one waiting for him in the world of art. 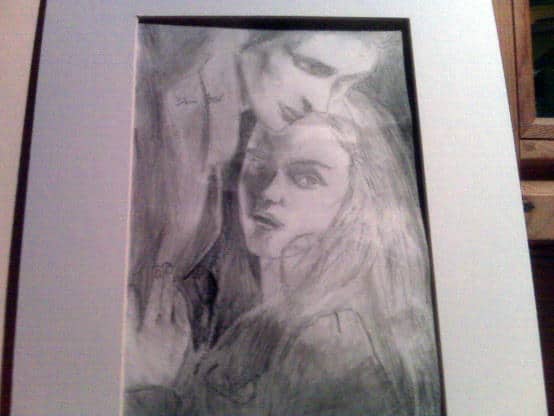 All in all, another example of how the Internet has helped another young talent be “discovered”.  Devin Fox is something of a “Renaissance Man”.  I say that because his talent is not relegated to just one area — like music, for example.  Ah yes, he is definitely talented in that area.  But his talents extend to the visual arts (photography and drawing) and acting as well.   And like many young people today, he is growing up in a world of technology for which he’s attained an early mastery, as is evidenced by his work with video.  Yes, a talented young man who possesses a great personality as well.  A young talent to watch for sure — a future star.

For more clips of Devin check his YouTube channel