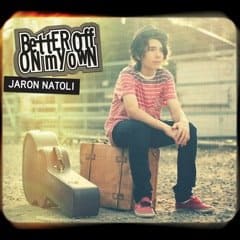 Jaron Natoli – Better Off On My Own

Last year, I introduced Jaron Natoli to the readers of TheSkyKid.com. His first album, titled  It’s You and Me, which featured two original songs and five amazing covers of bands such as Coldplay, MGMT, Leonard Cohen and U2, lighted up my interest in Jaron’s music. He has a style of his own.Nowadays,  many young singers can’t resist the urge to cover the latest song of the teen icon Justin Bieber, Adele or Bruno Mars – a shortcut to get noticed and showcase their talent. While such an approach works, after a while one gets tired of hearing the same songs over and over again, regardless of their otherwise excellent interpretations.

When I heard Afraid and It’s You and Me – the two original songs by Jaron in his first album –  I was stunned by his talent and wished to see more originals on his next album.

And Jaron did not disappoint. After a year of preparation, he released his second album titled Better Off On My Own, which features not one… not two…  but TEN original songs. There are many ways to interpret the title of Jaron’s second album: a uniqueness of style; a self-proclamation hinting at the style of the record;  a melancholic fable which the troubadour Jaron creates for us, accompanied by soulful guitars and magical piano harmonies.

While listening to the songs of Better Off On My Own, I could not help but think of the album as being of the Coming-of-Age genre. It’s not so much the age of the performer (twelve at the time of this writing), but the messages and themes in the songs: a loss of innocence; love and despair; hope; devotion and determination – all universal issues poignantly addressed through music and harmony. 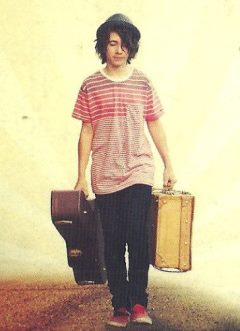 Jaron’s sound reminds me of the 80’s – reminiscent of those classic rock ballads of bands such as Foreigner, The Eagles, R.E.M. and U2 – and that’s quite an achievement for any musician, young or not. In an album with an overall Pop Rock Alternative vibe, the rap song Lost and Lonely surprises, hinting that Jaron can excel in more than one music genre.  Many of the other songs feature wizardly guitar solos, a true delight for anyone with a taste for real rock music.

Jaron Natoli is a name you want to keep in mind. I LIKED his first album, but  I LOVED the second one. Better Off On My Own is an album I do not hesitate to recommend. The music speaks for itself, but the fact is, while I was writing this review and listening to the album, I had two people inquiring of the singer’s name and complimenting the vibes that were blasting from my speakers.

Ever since TheSkyKid.com published the introductory article to the music of Jaron Natoli, I have been in touch with him and his father, Chris Natoli, (whose own album Road to Enlightenment has a special place in my music collection too). When I heard that Jaron was working on his second album, I requested an interview with him for the readers of TheSkyKid.com – as soon as the album was released. Jaron graciously agreed and below, in his own words,  you can find out more about him and his music. 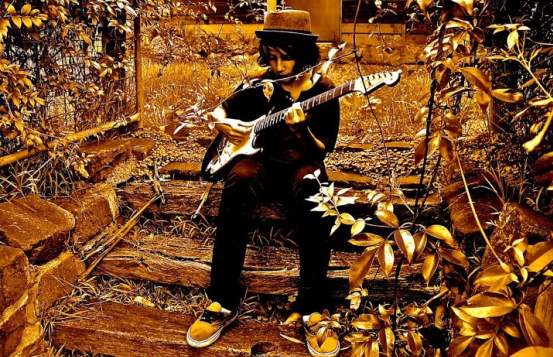 Note:  In the following interview, the questions posed by TheSkykid.com will be represented by an “SK“, while Jaron’s replies will show as “JN“.

SK:  Jaron, how are you today? Would you introduce yourself, how old you are and where you’re from?

SK: On your YouTube channel, there is a video with you playing drums at St. Andrews Pub  when you were only ten-years-old. What is the earliest memory you personally have of singing in front of an audience? 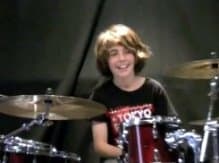 JN: My first live performance was when l performed with the school band at the School of Rock concert when l had just turned 10. I played drums and sung Seven Nation Army  by the White Stripes. l also played drums to Wipe-Out. There were about 500 people at the concert.

SK: One cannot help but notice how well you play various instruments (keyboard, drums, guitar) and sing. Do you take music lessons  and for what instruments?

JN: I taught myself how to play some piano.  Then my dad showed me how to use Logic Audio recording software.  So l would listen to the songs and work out the different parts by ear and then program all the parts on the keyboard. Then, from there, l started playing all the different instruments myself. I just started having piano lessons recently to improve my playing.

SK:  I would like to congratulate you on your amazing new album Better Off on My Own.  It is a favorite of mine, but for our readers who might just be finding out about it – how would you describe your new album as far as what kind of music one would expect to find on it?

JN: I would describe it as a Rock Alternative album and I would recommend it to anyone who likes Cold Play, Damien Rice and Nirvana.

SK: Is there a certain song on the new album that you guys are really looking forward to people hearing?

JN: I don’t really have a favorite song.  I just can’t wait for everyone to hear the album as a whole. At the moment, I am really getting into Normal Person.

SK: I have a favorite song from the album: Down The Road. It’s an emotional performance, with a guitar solo – resulting in a vibrant ilustration of being in love. Feeling the pain of love stirred up on my emotions.

Jaron Natoli Down The Road

SK:  What are you hoping that your fans and new listeners take away from the songs  on the Better Off on My Own album?

JN:  I hope that they think l have a unique sound and that they like the stories in my songs.

SK: Your father is a musician. What can you tell us about the influence he’s had on your life and your music aspirations? 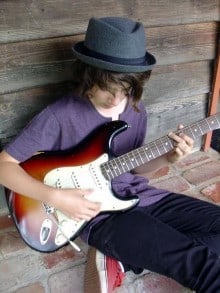 JN:  Since l was born, I have been surrounded by music.  My dad’s always playing guitar or recording in his studio. He is forever introducing me to different bands and different types of music. I have been going to his gigs from the time I was little – and still do. If it wasn’t for my dad, I wouldn’t have made my two albums.  He has taught me heaps about music.

SK:  If you could perform anywhere in the world, and with any artist (dead or alive), where and with whom would you like to perform?

JN:  I would like to preform at Madison Square Gardens with Eminem.

JN:  At the moment John Mayer, but otherwise Damien Rice. I don’t have a favorite young singer.  I think they are all good.

SK:  Outside  of music, what do you enjoy doing most?

JN: I love watching movies and l really like drawing and doing legos. 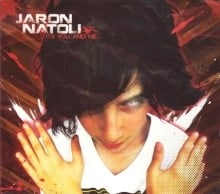 SK: Your first album, You and Me, has quite an unusual artwork on its cover.  What inspired it?  Is there a special story behind it?

JN: No special story.  My dad took heaps of photos and I did some different poses.  I really liked that photo the most, especially when some effects were put on it.

SK:  Listening to your music makes me wish I lived closer to Australia so I could have the opportunity to attend one of your live performances. Are you doing gigs?  And, if yes, where can your fans see you perform live?

JN: Yes, I am dong gigs. My next one is at St. Andrews Hotel and I also have a few festivals coming up. I will be putting all the dates up on my web site.

SK: What was it like making the new album?

JN:  It was really awesome.  I got to work with some great people. Reggie Bowman mixed and produced the album. He made me laugh and was fun to be around. My dad and our friend Rob Sedky helped co-write a couple of songs. We worked hard but still had fun. I got to work with some great musicians: Venom from Electric Mary played drums, and Bryan Colechin played bass guitar.  They told me heaps of funny stories. It was heaps of fun.

We would like to thank Jaron for taking time to do the interview with us. To find more about him please visit his official website.      You can purchase I’m Better Off On My Own directly from Jaron through his website or get it via iTunes or Amazon.